Chew on This: Bytes Can’t Do It All

By Carri P. Jenkins in the Spring 1996 Issue

Every year the United States spends billions of dollars on new technology, yet productivity continues to rise only a few percentage points. The problem, says a BYU accounting professor, is that companies are still conducting business using the traditional assembly-line model.

What worked for a paper-based society is no longer the answer for today, says Marshall Romney, a professor of accounting and information systems.

Take IBM Credit Corporation, for example. Several years ago, the company determined that a typical financing request passed through five different people and took anywhere from six days to two weeks to finish. Yet the work itself could be completed in 90 minutes.

The company recognized it needed an organizational overhaul or, as they say in the business world, “business process reengineering” (BPR).

Like many companies, IBM had added networks of powerful desktop computers, large data bases, and extensive software tools, yet it never studied how these advancements were being used in common business procedures, such as running a credit check or handling a payment.

“If organizations expect to achieve productivity breakthroughs, they have got to abandon outdated business procedures. And at the heart of this thinking is the way we use or do not use technology,” says Romney. 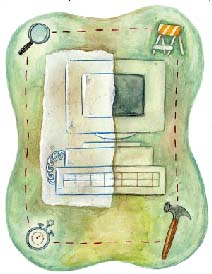 It’s an unfortunate fact, he adds, that despite the technological advancements, businesses have not significantly increased the productivity of many workers. “And the major reason is because they have simply relied on computers to speed up existing business processes.

“When computers first came along, there was great productivity because the machines could handle the work being done by hand. They sped things up. But we didn’t stop to look at the process to see if there might be a more efficient way of handling certain functions.”

Also, in some cases, technology has caused a decrease in productivity, says Romney. “For example, I can sit at my computer working on a spreadsheet and crunch endless numbers doing countless ‘what if’ scenarios. It gets to the point of an ‘analysis paralysis.’ And look at the over-polishing that goes on with insignificant documents because we now have the word processing skills to do so.”

In order to successfully reshape work practices, organizations must focus on why certain functions are done rather than on the details of how they are done, says Romney, who recently outlined in the journal, Internal Auditor, why BPR is not simply another passing business fad.

By looking at the big picture, organizations can achieve significant benefits, he says. “What we are finding is that fundamentally changing a business process produces an average improvement of 48 percent in cost, 80 percent in time, and 60 percent in defects.”

Yet the professor cautions that those organizations that want to achieve results must be willing to ask themselves two questions: “How close can we get to starting from a clean slate?” and “How can we achieve our goals using all the technological tools at our disposal?”

“We’re not talking about efficiency in the traditional way,” says Romney. “We’ve had hundreds of years to develop paper-based systems, and there’s probably not a whole lot more efficient way to do some of them. BPR involves abandoning outdated business procedures and creating entirely new ones using technological improvements.”

The pure theory of BPR is to design a new system that is not bound by the old system. Companies that have successfully managed such a restructuring, he says, have paid attention to seven key principles:

Using these guidelines, IBM Credit found that it didn’t take five different people to conduct a credit check—just one and a specialized computer system. The result: A 100-fold increase in the number of applications processed.

This company is not a select case, says Romney. Citibank, as another example, increased profits by over 750 percent by reengineering a credit analysis system, and Kodak reduced the time required to create a camera by more than half.

“It’s these kinds of success stories that have led me to conclude that reengineering is not just the latest management fad,” says Romney. “With all the technology that is out there, we are not going to stay competitive if we don’t start to reengineer many of our business procedures.”

The computer provides cutting-edge research and design tools for students and faculty campuswide.

When a Computer Is Watching You, It’s Not Always Bad