On the computer screen, horizontal bars fluctuate, hovering near 100 percent. The bars show how much memory space is being used on BYU‘s new SGI Onyx2 Origin 2000 supercomputer, says R. Brent Adams, associate professor in the School of Technology. Within a month after the machine was acquired, he says, “We had maxed out the memory.”Purchased with funds donated by Phoenix, Ariz., builder Ira Fulton and procured under a partnership program with SGI (formerly Silicon Graphics), the $5-million computer system is housed by the College of Engineering and its School of Technology, but serves many departments across campus.Because the supercomputer was acquired through a donation, Adams says, its use is not restricted by the terms of a government grant, as supercomputers at other universities often are. The computer is designed particularly for “visualization,” the enhanced graphics used in industrial design and satellite imagery processing, among other applications. 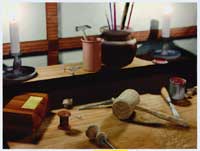 Unveiled in January 2000, the computer has been upgraded twice. By December its three segments will have a total of 112 processors, 60 gigabytes of RAM, and about 1.75 terabytes of hard drive space.The supercomputer’s largest, 64-processor portion is 14 feet long and weighs about one ton; it will be used mostly for computational work. A smaller, 16-processor unit will drive a virtual reality center (coming this fall) that allows designers to view three-dimensional projections of their work.All those processors and gigabytes have already helped students and professors complete dozens of research projects. Adams says about 25 professors and 100 graduate and undergraduate students are currently using the supercomputer for projects ranging from three-dimensional brain mapping to a virtual reconstruction of the ancient city of Capernaum.“There’s a lot of work that we now can do on campus that we absolutely couldn’t do before,” Adams says. “There are faculty working to get grants they wouldn’t have gone after before because they didn’t have the capabilities. Doug Chabries [dean of the College of Engineering and Technology] has made this system available to all of campus, so faculty can now do the pet projects they’ve been sitting on.”Adams uses the computer to create three-dimensional graphics. Recently, he and six industrial design and visual arts students completed a 10-minute animated film that has been accepted in a European film festival. The supercomputer “allows us to be much more complex in the visuals,” he says. And while his previous computer needed an hour to complete one frame of the film, “The supercomputer was turning out frames every 45 seconds,” he says.Like Adams and others, Dilworth B. Parkinson, a professor of Asian and Near Eastern languages, uses the computer for its speed. Parkinson is compiling an Arabic thesaurus, and he relies on the supercomputer to tell him the frequency of a word’s appearance in the 75-million-word corpus he has compiled. “If I hired a bunch of assistants to see how many times words are used and where, it would take years,” he says. The supercomputer gives him a word frequency in about three minutes—as much as 10 times faster than other powerful computers.In addition to providing speed, the computer helps perform cutting-edge research. At the International Geoscience and Remote Sensing Symposium in July, students and faculty from the Department of Electrical and Computer Engineering presented 12 papers reporting research done on the supercomputer. “The supercomputer has allowed us to do some kinds of processing that we haven’t been able to do before,” says professor David G. Long, speaking of the satellite projects and geographical studies he and his students and colleagues reported. Long and other professors enjoy the upgrade in technology and the boost it gives their work. “This is all new research,” he says. “These things are state-of-the-art.”

Since choosing its colors, BYU has featured nearly every shade of blue, powder to royal.