By Karen Snow in the Spring 1996 Issue 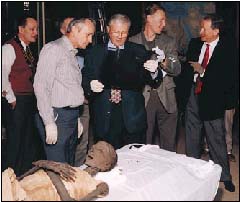 A BYU professor and a team of specialists discovered an iron pin in the knee of an Egyptian mummy at the Rosicrucian Egyptian Museum and Planetarium in San Jose, Calif., evidencing an advanced surgical procedure performed nearly 2,600 years ago.

C. Wilfred Griggs, director of ancient studies at BYU and a professor of ancient scripture, was intrigued by the discovery of the pin in August 1995 when he and a team of experts saw it in the X ray of one of six mummies they were examining at the museum. Griggs was visiting the museum as a precursor to a lecture he was asked to give in San Jose in the fall. When invited to speak, the professor asked if he could first analyze some of the artifacts in their Egyptian museum so he could add a local viewpoint to his talk on the application of science and technology in archaeological field work.

After Griggs’ August visit to the museum, he returned to Provo thinking the 9-inch orthopedic pin was inserted centuries after the death of the mummified body (named Usermontu from an inscription in the coffin in which the body was found). From the X ray taken of the wrapped knee, it was impossible to determine any ancient characteristics of the metal implant.

“I assumed at the time that the pin was modern. I thought we might be able to determine how the pin had been inserted into the leg, and perhaps even guess how recently it had been implanted into the bones,” Griggs says. “I just thought it would be an interesting footnote to say, ‘Somebody got an ancient mummy and put a modern pin in it to hold the leg together.'”
Griggs returned to the museum in November to unwrap the mummy and to determine what he could by visual examination. From this examination of the exposed joint, Griggs and the surgeons who have worked with him now believe the pin was implanted between the time of Usermontu’s death and his burial.

“It didn’t appear to be a modern pin insertion. There were some characteristics of the knee joint, namely some of the ancient fats and textiles, that were still in place and would not have been in place had the leg been separated in modern times,” Griggs says.

Griggs returned to Provo a second time and gathered a team to go to San Jose in February when he and the medical doctors made a full-scale investigation of the mummy, and the team concurred that the pin was ancient and was implanted after Usermontu’s death.

Griggs, Dr. Richard T. Jackson, an orthopedic surgeon from Provo, and Dr. E. Bruce McIff, chief of radiology for Utah Valley Regional Medical Center, drilled the bone containing the pin to try to extract samples of the bone and the metal from the pin.

“We are amazed at the ability to create a pin with biomechanical principles that we still use today—rigid fixation of the bone, for example,” Jackson says. “It is beyond anything we anticipated for that time.”

The pin, says Griggs, tapers into a corkscrew as it enters the femur, or thigh bone, similar to biomechanical methods currently used. The other end of the pin, which is positioned in the tibia, or shin bone, has three flanges extending outward from the core of the pin that prevent rotation of the pin inside the bone.

The cavity for the pin in the tibia also contained a resinous glue that aided in the fixation of the joint, says Griggs, who has excavated in Egypt for more than 15 years and is a historian and ancient texts expert. The team discovered the resin, he says, when a specialist, using a high-tech medical drill, exclaimed that there was wetness inside the bone. The drill bit, moving as fast as 75,000 rpm, had generated enough heat to melt the resinous glue, which is believed to consist of a type of cedar and other organic materials.

The resinous glue also was more advanced than Jackson expected. “It is a precursor of the cement we use these days to secure a total joint.”

Explaining such meticulous effort for a postmortem body, Griggs says Egyptians believed strongly in a physical resurrection. The technician preparing the body, he says, was to make the body appropriate for the reunification of body and spirit.

“How fascinating that the technician took such considerable thought constructing the pin,” he says. “The technician could have just simply wired the leg together and assumed that in the resurrection it would knit back together.”

The pin is a unique find, says Griggs, who has never before encountered anything from the ancient past displaying such advanced surgical understanding or techniques. Griggs says the sophisticated surgery in this mummy suggests that such procedures may have been performed previously on bodies, and the team was fortunate enough to encounter one sample.

In fact, they were fortunate to have access to the mummy. The Rosicrucian Museum acquired Usermontu’s sarcophagus in 1971 when it appeared in a Neiman-Marcus Christmas catalog in a section called “His and Her Gifts for People Who Have Everything.”

The sarcophagus was thought to be empty when a worker heard a rattling from within the sarcophagus during preparation for shipment, museum officials say. The rattling turned out to be an unwrapped ancient mummy inside the coffin. Whether it was originally the body for which the sarcophagus was made cannot be determined. The museum purchased both the mummy and the sarcophagus for $16,000. Before placing the mummy on display, museum curators wrapped the body in ancient linen from other collections in storage.

“It’s a strange story,” Griggs says of Usermontu’s discovery. Griggs believes the sarcophagus was probably not the original tomb used for the burial of Usermontu.

But the story of the mummy’s acquisition may not be as intriguing as the implications of its existence.

“The story tells us how sophisticated ancient people really were,” Griggs says. “Sometimes our cultural arrogance gets in the way of our being able to appreciate how people from other cultures and times were able to also think and act in quite amazing ways.

“The story has so many ramifications for how we look at the past. It also tells us how little we truly know.”