By Michael D. Smart in the Winter 1999 Issue

Mark C. Belk sports a button claiming him as one of the “Friends of Trash Fish,” but he likes to wrench a wriggling brown trout from the Provo River as much as any fisherman.

That love of fishing, as well as his post as a BYU zoology associate professor specializing in fish, led to his participation in an effort to restore the Provo River to its pre-Central Utah Project glory. Belk’s job is to determine what type of habitat will maintain a balance of sporting fish, such as brown trout, which were introduced to the river in the early 1900s, and nondescript yet biologically significant native fish, such as the leatherside chub and redside shiner. 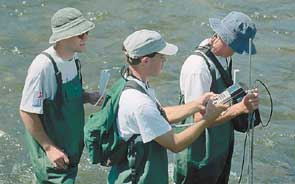 “The Provo River has a history of abuse since the 1930s,” Belk explains. “The engineering that has taken place has been successful in getting water to this valley, but it was done with environmental recklessness.”

That “recklessness” has resulted in an unnatural setting that tips the scales in favor of the brown trout in its quest to gobble up the indigenous prey fish. “From both a biological and a recreational viewpoint, it’s important to have natives with brown trout,” Belk says. “Native fish provide the necessary food resources for a healthy population of large brown trout, and humans like to catch large brown trout.” He also points out that millions of dollars and loads of restrictions could become necessary if one of the native breeds ends up on the endangered species list.

Belk hopes to solve the Provo River’s problem before it comes to that. He is working with a team of researchers who are exploring the needs of plants, small mammals, fish, insects, and birds to put together a plan to restore the river so it can support the wildlife. The group is in the second year of its three-year study.

The researchers started by examining 1930s aerial photographs that reveal a meandering, winding stretch of river between the current sites of Deer Creek and Jordanelle Reservoirs. Since then the natural path of the river has been straightened and channelized to increase the flow of water to the masses west of the Wasatch Mountains.

Such a deep, fast-paced environment favors brown trout but sets up the native fish for trouble, says Belk. A brown trout likes to lie in wait behind a rock or in a depression in otherwise fast-moving waters, allowing the river to bring it its food. Using its sharp eyesight, the trout pops up and snags its treat, then lowers back into its waiting spot, expending a minimum effort.

The smaller native fish prefer slow-moving, warm backwaters and side channels where they can roam relatively free of the fear of getting swallowed. These “safety zones” are also important for young brown trout, which, like the young of most species of fish, are vulnerable to cannibalization by their adult counterparts. 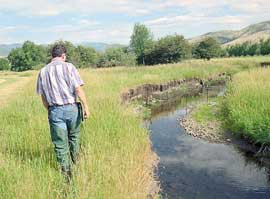 Professor Mark Belk surveys a section of river that, with its bends and side channels, appears to be able to support both brown trout and the smaller fish native to the Provo River.

To find the right mix, Belk and his students have been sectioning off stretches of the river’s feeder streams to test different combinations of habitat and number of brown trout. They set up two mesh “fences” 30 feet apart, weighted with rocks. Then they pull all the fish out of that stretch of closed-off stream and add 60 native fish–half juveniles, half adults. Finally, the researchers add one, three, or five brown trout. After three days, the team returns and removes all the fish, counting how many of the smaller native fish remain.

Another test takes place in a 300-gallon tank in a BYU lab, where researchers watch how the prey fish behave when threatened with attack by a model brown trout.

Belk’s preliminary findings indicate that the natural course of the Provo River, with its bends, side channels, and backwaters, is a habitat that can support both the brown trout and the prey fish to an acceptable degree. In one section of the river just south of the Jordanelle Dam, engineers have reintroduced such an environment. Baby brown trout are visible flitting around a side channel, and a calm, warm backwater harbors chubs and shiners.

“Researchers will be able to get a lot of mileage out of this study,” Belk says. A similar project is under way in Florida to restore a stretch of the Kissimmee River that was turned into a canal. “This sort of research is going to become increasingly important as we as a society try to undo the environmental damage we’ve done over the years.”

A new BYU study has shown that mosquitofish, like this one, have become predators of Utah's native fish.

There are fish, sure—but that is certainly not the best catch on these construction-management outings.