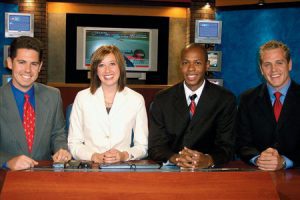 Robert Roxburgh, Andrea Candrian, Othelle Richards, and Brian Carlson compete for the news, representing three TV stations in the same market, but are friends off the set.

When four BYU graduates all landed jobs in the same midsized TV market, they formed an instant bond, even if they did work for competing stations.

“I felt like I kind of had my BYU family,” says Andrea J. Candrian (BA ’04) of discovering other BYU alumni working for Tri-Cities, Wash., TV stations.

“With Proper Lessons Taught Therein”: The Flourishing of Home Literature

Learn of the good that can come out of novels written by Latter-Day Saints.

BYU sports success is bringing back the good old days and bringing out alternate personalities.