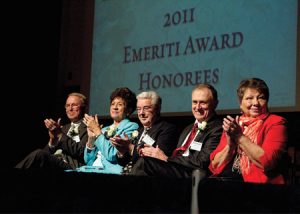 Douglas F. Jackson (BS ’88) gives a common description of Clark, his mother-in-law, when he describes her as so “anxiously engaged” that she does nothing halfway. A mother to nine children, Clark has been active her whole life, helping produce stake plays, assuming leadership positions in the Church and community, and serving a full-time mission at the Washington D.C. Temple Visitors’ Center. She has served in 10 different countries helping operate clinics where her husband provides dental service. “Because of her deep love for others,” says her husband, Leon, “she has slept and lived in conditions most wives wouldn’t consider.”

Nelson enjoyed teaching during a graduate assistantship so much that he changed his professional focus from sociology to education. He has since taught at Mt. San Jacinto Community College, Butte-Glenn Community College, and California State University, Chico. Nelson directed a training program for addiction counseling, chaired a social science department, served as acting dean of social and behavioral sciences, and wrote a manual for part-time teachers. He also has been a World Exchange director and a national Job Corps teacher. Nelson has received many awards, including the Outstanding Faculty Award at Butte-Glenn Community College, and is a Chico Chamber of Commerce Teacher. Additionally, he has been in several bishoprics and has served two missions.

Packard’s life has been punctuated by service to his family, the Church, and Scouting. After attending BYU for three years, Packard was accepted to the University of Oregon dental school. He served in the U.S. Navy for two years and had a private dental practice in California with two brothers for 43 years. He helped several prospective missionaries complete dental work before their missions and has given dental service in Mexico and Honduras. Packard served as mission president of the Chile Santiago North Mission, Regional Representative, and president of the Los Angeles California Temple. He is currently a temple sealer and a patriarch.

Peterson has spent a lifetime serving her community both personally and professionally. She was Clark County Mother of the Year, Distinguished Woman of Southern Nevada, and recipient of the Liberty Bell Award. As court administrator for the Eighth Judicial District Court, she revamped and implemented a new jury system. She is an in-demand speaker and teacher throughout the community and the Church. Peterson served in the Georgia North Atlanta Mission with her husband, Grant, and for 32 years has taught a weekly scripture scholar class. The titles she enjoys most are mother, grandmother, and great-grandmother.

In 1959 Wade received a bachelor’s degree in political science from BYU. He then went on to earn a doctorate in educational administration. He taught high school in Whittier, Calif., and was principal of the Church College of New Zealand, president of Dixie College, president of BYU–Hawaii, and vice president of Student Life at BYU. Wade has received several honors, including the Brigham Award, a Presidential Citation at BYU–Hawaii, Emeritus Phi Kappa Phi, and membership in the Dixie State College Hall of Fame. Currently a stake patriarch, Wade has also been stake president, a temple sealer, and president of the Washington D.C. South Mission.

Eight individuals have been honored with emeriti awards by the BYU Emeriti Alumni Association.

Eight alumni were honored for their service to communities, professions, church, and family at March’s emeriti luncheon.