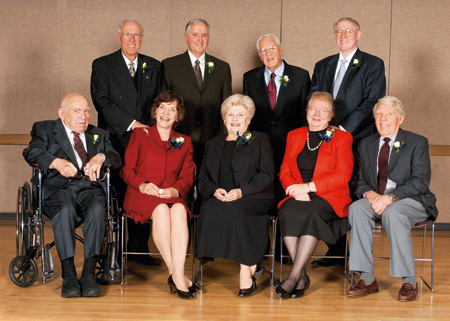 Arnoldsen has served on the Utah Valley Symphony board for 18 years, has been a precinct chair or vice chair for the Republican Party, and has performed with the Chauntenette Ladies Chorus. She taught at Shandong Teachers University in China and cowrote a dictionary still used in Shandong Province.

A Navy lieutenant commander in World War II, Fuhriman was a civil engineering professor at BYU, Utah State University, and Colorado State University and a research engineer with the U.S. Soil Conservation Service. Fuhriman founded a consulting firm and was an advisor and expert witness on dozens of water-rights cases.

Jackson cofounded the Richfield Cooperative Nursery School and has been on the Sevier District Board of Education and an officer with the State School Boards Association. Past president of the BYU Emeriti Association, she has been Sevier County Mother of the Year and Sevier County BPW Woman of the Year.

McKay, also a former emeriti president, was BYU student body president and president of the Pacific Student President’s Association. He pioneered development of BYU’s MBA program, helped start and upgrade universities in Nigeria and Rangoon, was dean of the School of Business at Weber State College, taught at Texas Christian University, and was a senior vice president for Skaggs.

A cofounder of EFI Electronics, Olpin has been president and CEO of Hugh O’Brian Youth Leadership of Utah and now serves the Boy Scouts of America on the Utah National Parks Council executive board. Olpin sat on the Provo City Parks and Recreation advisory board and was a Kiwanis president four times.

Ottesen, who passed away in March, taught at BYU and Harbor College as well as in the California State University system. For two years she taught in China at the Shandong Medical University and Peking University.

Pace is a professor emeritus of organizational leadership. Among other awards, he received a Research Excellence Award from the BYU College of Fine Arts and Communications.

Pope served on the writing committee for Gospel Doctrine lessons for the Church of Jesus Christ for 42 years, taught religion classes at BYU for 27 years, and was the first woman to teach religion on the Know Your Religion circuit. She has written three books and received an honorary doctorate from Utah Valley State College.

Sturgis is an international expert of maternal and child health programs in developing countries. He has worked in approximately 25 countries, most recently in Albania. He taught sociology at BYU and four other universities.

Illustration grad Shawna Tenney is using art to help children bring their own dreams and fantasies to live.

To enrich their BYU experience, all incoming freshmen this fall received a copy of the new Y Book.