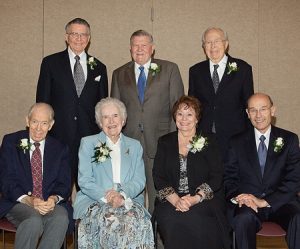 Craven worked in auxiliary services at BYU for 20 years and also served as director of the Aaronic Priesthood Department and as secretary to the Quorum of the Twelve Apostles. A former mission president and temple president in New Zealand, he was a member of the Second Quorum of the Seventy from 1990 to 1996.

DeMordaunt has served Idaho Falls as a radiologist, a stake president, and a counselor in the Idaho Falls Idaho Temple presidency. He was a mission president in the South Africa Johannesburg Mission. Whether harvesting potatoes at a stake farm in his 70s or providing a home for people forced to leave their own homes after joining the Church, he has made service a lifelong practice.

Duffin worked at BYU for 32 years in many positions, including assistant vice president of personnel. He was president of the College Placement Council and the Rocky Mountain Placement Association. He was active in the Provo Orem Chamber of Commerce and the United Fund, and he also served on the Young Men General Board. BYU’s Ira A. Fulton College of Engineering and Technology recently established the B. Keith Duffin Faculty Fellowship in his honor.

After 10 years as a clinical nurse, Edmunds served on the nursing faculties at DePaul University, BYU, the University of Maryland, and the Uniformed Services University of Health Sciences. She became a national leader in the development of the nurse practitioner role and has been an adjunct faculty member at Johns Hopkins University School of Nursing and at Beijing University. With a colleague, she established the consulting firm Nurse Practitioner Alternatives.

Hales was a doctor in the U.S. Navy and later established a successful ear, nose, and throat (ENT) practice. He brought advanced medical and surgical treatments to the Ogden region, including the first surgical microscope for hospital use in 1961, allowing him to perform middle-ear microsurgery. He was chief of staff at St. Benedict’s Hospital (now the Ogden Regional Medical Center), head of the ENT section at McKay-Dee Hospital, and a clinical instructor at the University of Utah Medical School.

Olsen is noted for her virtue, kindness, energy, and service. With her late husband, Ralph Reed Olsen (BS ’42), she adopted seven children and made immediate, extended, and distant family her passion. She has been president of the Daughters of Utah Pioneers and the Utah chapter of the Daughters of the American Revolution. At age 75 she served a mission in London, and she has worked for 18 years in the Provo Utah Temple.

Porter distinguished himself as a professor, department chair, and dean in the BYU College of Family Living. In 1963 students selected him as the university’s Professor of the Year. After retirement he became involved in humanitarian projects, and seven years ago he and his wife, Katherine, formed the charity Families for Children International, an organization that is building a school and homes for orphans and destitute children in Ghana.

Snow, a former assistant vice president of development at BYU and an emeritus professor of public administration, helped create the BYU master’s of public administration degree. In addition, he helped to restructure and reorganize Utah state government as a member of the Utah State Senate and as chair of the Utah State Constitutional Revision Commission.

What Is Your Calling in Life?

As you discover and nurture your spiritual gifts, God will lead you to your life’s work to benefit of his children.

Sending Parents Back to School

At all levels, children’s performance is directly related to how much involvement their parents have in their education.

Author Marianne Monson uses historical fiction to bring the stories of her ancestors to life.