BYU Club Sports: For the Love of the Game

As a high school senior in Overland Park, Kan., Chad Deshler was regarded as one of the top prep soccer players in the nation. A gaggle of collegiate programs, most notably Notre Dame, recruited him and offered him athletic scholarships.

Instead of choosing to kick around a ball for the Fighting Irish, however, Deshler decided to attend BYU, knowing full well that the school does not hand out grants-in-aid for his sport. 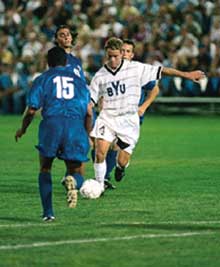 Freshman Chad Olyer dribbles downfield to help score the second goal in BYU’s 2 – 0 win against Utah State. Wins come often for the Soccercats, who have captured three national tittles in a row and enjoy the support of an average 800 – 1000 fans per home game.

At BYU, men’s soccer maintains extramural status. Translation? No scholarships, no free books, no free housing, no free meals, no free shoes. Nothing.

Yet for Deshler, BYU was what he wanted.

“I just love the game,” says Deshler, now a freshman who has accepted a call to serve an LDS mission to Jamaica. “It’s a good atmosphere here, and I knew soccer wouldn’t be my whole life. I would have been successful at other schools, but I can be more successful at BYU.”

Deshler is one of many BYU student-athletes who have turned down scholarships from other schools to compete for the Cougars “for free.” In fact, many of these athletes pay fees to offset costs.

“These young men and young women are as dedicated as any group I’ve seen,” says Lee Gibbons, who is in his fifth year as director of BYU’s extramural sports program, which has been in place since 1968. “They come here first for academics and second for sports.”

“Many kids want to come to BYU so badly, they give up a scholarship,” says Gibbons. “It’s astounding.”

Even more astounding, perhaps, these club teams thrive despite minimal funding and meager publicity. Plus, some BYU teams cannot contend for national championships because those championships are scheduled on Sunday. And in many cases, NCAA-sanctioned teams are reluctant to compete against BYU’s teams because of their club status.

“It’s difficult to get teams to play here,” explains rugby coach David Smyth. “They don’t want to come to Provo and get a thumping. It wouldn’t look good on their record to lose to an extramural team.”

Oh, did we mention that these extramural squads are simply extraordinary? Chew on these figures:

The lacrosse team has won 85 percent of its matches the last five years. It claimed the extramural national championship in 1997, the first year of that event. In 1998 BYU lost the national championship game in overtime, and in 1999 the team was ranked number one before losing in the quarter finals of the tournament.

The rugby team has lost only three games in three years. Because the championships have been played on Sunday, though, the Cougars have been denied a shot at a title.

The women’s racquetball team just won the 1999 national championship, its fifth straight title. Last year, the team doubled the score of the second-place team. The men’s squad, also one of the best in the country, has forfeited championship matches played on Sunday. In 1995, 1996, and 1997, the two teams won the combined team championship.

In men’s soccer, BYU is so dominant that the team is the extramural soccer equivalent of the Chicago Bulls (when they had Michael Jordan). The Soccercats, as they are known, have won three national championships in a row. “It’s become anticlimactic,” says coach Chris Watkins. “We’d like a tougher challenge.”

Not only does the soccer team perform well on the field, it does well in the stands, averaging between 800 and 1,000 fans per home game. “Our home attendance is a big part of our success,” Watkins says. Lacrosse and rugby also have loyal followings.

It’s not easy, though–for any of the teams. Most extramural players juggle part-time jobs and a full load of classes. Unlike scholarship athletes who receive a monthly stipend, extramural athletes receive precious few perks. “It’s the little things that make it hard,” says Watkins, who is also assistant coach for the BYU women’s soccer team. “It would be nice to be able to use the locker rooms and have their meals paid for on the road.”

“It’s tough on these kids who put in so much and the only recognition they get is from me,” Watkins says. “If one of them makes All-American, the team knows and that’s about it.” 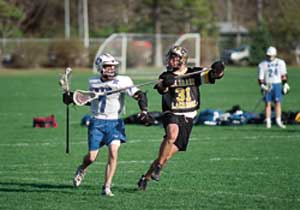 Matthew Davis (left), men’s lacrosse team senior captain, breaks free of a Colorado defender in a 17 – 6 win. Winning or losing, coaches say club sports get stronger support at BYU than at other universities.

Extramural coaches face other obstacles as well. Last year, for instance, racquetball coach Dennis Fisher saw his top women’s player quit the team due to work and school obligations. And now two racquetball courts on campus are being converted into weight rooms for NCAA-sanctioned sports. Some of the remaining courts aren’t regulation size, says Fisher, who is also the head equipment administrator for men’s athletics.

Extramural status can be a strain. Then again, BYU student-athletes know what they’re getting into when they come, and they’re not complaining.

“Of course it would be nice to be on scholarship,” says racquetball player Valorie Woodbury. “But we choose to be here. We don’t get paid, and we don’t have to devote our whole lives to it. My whole existence at BYU is not dependent on it. But it’s so fun to belong to a team. I feel truly blessed to be playing.”

While BYU’s club sports don’t receive the level of financial support that the varsity sports do, the Y’s extramural program is much more robust than those at other universities.

“I’m absolutely pleased with BYU’s support because I know what it’s like at other schools,” says lacrosse coach Jason Lamb. “BYU treats us like a department on campus. At other schools, it’s a club that does its own fund-raising, and the players do a lot of drinking and partying. BYU takes it seriously. What we have is head and shoulders above what other schools have.”

BYU’s support of extramurals, which includes funding travel by van and airplane, is definitely uncommon. “Other teams say to us, ‘You guys practice? You have a coach?'” Woodbury says. “They’re amazed.”

The coaching, Gibbons says, is another key to BYU’s resounding success. Coaches put in countless hours, directing the teams in their spare time; Fisher and Watkins are the only ones employed full-time by BYU.

“We have excellent coaches,” Gibbons says. “They’re paid peanuts for what they do.” What they do is more than coach–they also act as public relations officials, travel directors, and accountants. “We play against many schools that have student-coaches that come and go,” Gibbons adds. “We have consistency.”

BYU also consistently attracts top athletes in the club sports, due mainly to the built-in recruiting base of LDS athletes. The pipeline brings talented players from all over the country and the world. BYU’s rugby roster includes players from South Africa, England, and New Zealand, veritable hotbeds of the sport.

In addition, many extramural athletes are returned missionaries, a fact many believe contributes greatly to BYU’s ability to win games.

“They’re committed, and they’re more mature than players from other schools,” Lamb says.

“We’ve got a mature group of guys,” says rugby player David Wheeler. “It’s a group that is willing to dedicate themselves. I’ve played with guys who are now in medical school and dental school. We have a higher class of players than people think.”

Now that softball has been granted NCAA status by BYU, don’t blame the other extramural sports for feeling a tad envious. Being NCAA-sanctioned means scholarships, more funding, and more perks. A few other BYU teams–such as men’s volleyball and women’s soccer–have made the jump from extramurals to the NCAAs and have been wildly successful.

On the other hand, there’s a certain charm inherent in extramural sports. “When an athlete is on scholarship, they become an employee of the school,” Gibbons says. “It doesn’t have the same feel. These are what I like to call pure sports. These kids are here for one reason–they love it. Same goes with the coaches.”

“I love the game, and I love coaching,” Lamb says. “I’ve had offers to coach at other campuses but I didn’t want to do it. That’s because I love BYU and the kids here. I used to think the NCAA was our dream. But the more realistic goal is for alumni and parents to put money into the program. That way, we could do a lot more.”

“I enjoy it,” says Wheeler, who traded in his football helmet for a rugby uniform three years ago. “It doesn’t take the demands of scholarship sports. The school funds it, and you get to travel and play against good competition. A lot of guys are offered scholarships to other places, but we came here. We’re doing it for the love of the game.”
Jeff Call, a 1994 BYU graduate, is a sportswriter for the Deseret News.

These Steep Woods and Lofty Cliffs

The Power of Not Knowing

In leadership and in life, what you don’t know might help you, says bestselling author and alumna Liz Wiseman.