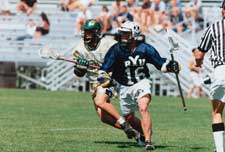 The BYU men’s lacrosse team has captured their second national championship in four years. The Cougars entered the U.S. Lacrosse Intercollegiate Association tournament seeded sixth but won games in three consecutive days, including upsets of the second and third seeds, to meet the Colorado State Rams in the final.“I had no problem motivating these guys,” says Coach Jason J. Lamb of the final. “All we did was show up and talk about some strategy. These guys were spitting green because of our history with Colorado State.”Overcoming an early season loss to CSU and a one-point loss to the Rams in the regional championship, the Cougars won 17–13 behind sophomore midfielder Troy K. Taylor, who had five goals and two assists. The victory also made up for a disappointing finish in last year’s tournament when BYU entered as the first seed but lost in the quarterfinals.

Where Will It Lead?

On the roads of life, small deviations in direction can result in dramatic changes in destination.