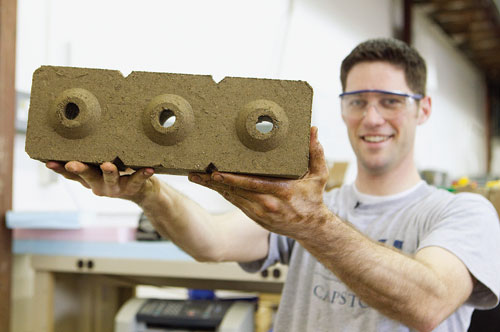 Joran Booth shows off his team’s block design, which cuts the cost of Kenyan home building by 30 percent.

When she was growing up, Emily Savage (BS ’10) loved playing with Legos.

“It wasn’t until I was about 13 that I realized it wasn’t necessarily cool for girls,” says the recent BYU grad. But she went on to embrace that side of herself—as well as physics and calculus—when she chose to major in mechanical engineering. And for her senior project, her experience with Legos came in handy.

Savage and her teammates were challenged by sponsor U.S. Synthetic to create a way to mass produce inexpensive housing blocks—like bricks, only bigger—for the many rural Kenyans who live in huts made from sticks and mud.

The student team—Savage, Joey Kent (BS’10), Stanton M. Woods (BF’10), and Joran W. Booth (BS’10)—came up with an innovative design for interlocking blocks made from a soil mixture that’s only 5 percent cement. The way the blocks connect, little or no expensive mortar is required. The blocks need only sunlight to cure, not a fire, which is significant in the badly deforested lands where they will be used.

“Once we had this design, then we had to come up with a press to make it, and that was the tricky part,” says Savage.

They fashioned an entirely new press out of steel, testing various cones and cylinders to make the interlocking features. Now, using only muscle power, the team can make sturdy blocks out of soil, water, and a little cement. They say a team of four people can make enough blocks for a Kenyan home in five days.

“It’s sobering to think that someone will be tucking their kids into bed in a home made out of blocks from our press,” says Woods, credited by team members with the main idea behind the new style of block—one that could reduce the cost of building a house by 30 percent.

Kent will join faculty coach W. Jerry Bowman (BS ’78) in presenting the project at an international housing conference in Brazil in August.

Atem Aleu (’07) wondered when his drought-stricken country would see rain. And then one day it showered bullets.