A Sudanese student uses art to heal from his past and help others find themselves. 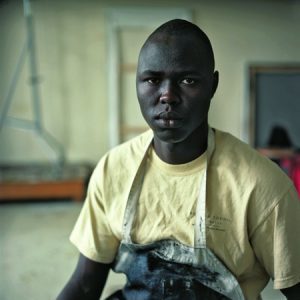 In the late 1980s Atem Aleu (’07) would wonder when it was going to rain in his drought-stricken country. And then one day, bullets showered down on his village, killing his parents and brothers.

All across southern Sudan, similar scenes played out as civil war raged. Aleu was only 8 years old when he joined thousands of other orphaned boys in a foot journey for survival across Sudan, Ethiopia, and into Kenya. “We decided to leave the country when most of us were very young. Many people died on the way. There was about 20,000 boys, and we lost almost 5,000 on the way,” Aleu explains as he paints in a classroom in the Harris Fine Arts Center. “For the first time we didn’t mind about what we were going to eat, but we did mind that we could get to a safe place so that the government could not kill anybody.”

He takes a painting knife and begins to scratch his emerging painting into mismatched fragments. To an untrained observer, the scarred canvas appears ruined. “People still call us lost boys; people know us through that name,” says Aleu. “It is good to use the name lost boy, but we are not lost. We were just lost from our parents, but we are not lost from God. God knew where we were going and knows where we are.”Aleu is a sophomore who hopes to be accepted into the visual arts program and says he is drawn to art because “it is a gift from God.”While living in refugee camps, Aleu taught art for three years because he is committed to share what he has with others. Even now, Aleu continues to think of ways to serve those still in the refugee camps. “I pray a lot about it, and God always responds to my praying,” he says. “I can plan to do something for other people and even though I don’t have one cent, God can try another way. God really did it, not me.”Time passes and Aleu turns the painting upside down and backs away from it to gain another perspective. Aleu eventually found safety in Kakuma, a United Nations refugee camp in Kenya, and with help from the International Rescue Committee he was granted asylum in the United States in 2001. Only a year after arriving in Utah, Aleu founded the African Refugee Art Club in 2002. In 2004, Aleu returned to Kakuma to teach art and help other refugees express themselves through painting. Utah Valley State College featured Aleu’s and other refugees’ art in an exhibit in 2004. This April Aleu returned to Kakuma where he is teaching during the summer, and he plans to have another exhibit when he returns to America, this time at the University of New Hampshire.Aleu begins to pack up his art supplies. He has another project waiting in a studio downstairs that needs his attention for the remaining hour that the studio is open.In addition to teaching, this summer will be special for Aleu because he will return home. “I have not been to Sudan since I was 8. I will go to Sudan this summer when I am done with the workshop. I want to see my aunt. I have to see the land. I miss it,” he says. “I want to see what is going on there and what they need, so that I can do something.”

The manager of the refugee initiative for LDS Charities calls for help in a problem “so acute, so intense.”