Brian Stokes Mitchell will be BYU Spectacular’s honored performer this Oct. 6 and 7. 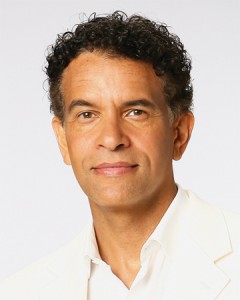 Known for his rich baritone voice, Tony Award winner Brian Stokes Mitchell will steal the show at BYU this Homecoming.

Baritone sensation Brian Stokes Mitchell, dubbed “the last leading man” by the New York Times, won a Tony Award for best actor in a Broadway revival of Kiss Me Kate. He counts a seven-year stint onTrapper John, M.D. among his many television and movie credits. He performed with the Mormon Tabernacle Choir in its 2009 Christmas concert.

And Mitchell will wrap his breathtaking baritone voice around the Marriott Center in October when he headlines BYU Spectacular in a show patterned after the 2011 Homecoming theme, Hold High the Torch.

“Brian Stokes Mitchell is the ideal artist for this show,”  says artistic director Janielle Hildebrandt Christensen (BA ’67). “He is a man of great sophistication and elegance, and his vision is one of excellence. We are honoring Gerrit de Jong Jr. as our founder this year, and he, too, was a man of sophistication, elegance, and excellence. It should be a lively, inspiring, wonderful show.”

Mitchell typically brings a sense of delight to his concerts; his joie de vivre is a trademark. He will perform two solos at Spectacular: “Wheels of a Dream” and “The Impossible Dream.” He will also perform several numbers with BYU performing groups, including “We Are Family” and “Through Heaven’s Eyes” from The Prince of Egypt. Mitchell took special pleasure earlier this year when he learned his rendition of “Through Heaven’s Eyes” was the wake-up call for the crew of the February 2011 space shuttle Discovery. This was one time when the singer’s voice was literally out of this world.

“Brian [Mitchell] was on campus a year ago and made his concert debut on the BYU Performing Arts Series. He also did a master class for our students anticipating performance careers,” Christensen says. “He talked with such intelligence and sensibility about how a career should be fashioned. What particularly impressed me was his focus on balance and bringing light and truth to what you do. The students really resonated with him, and when he performed for them, they felt they were listening to more than an incredibly talented singer.”

BYU alums go forth serving by expanding literacy and creating community via music.