For those who attended BYU but didn’t graduate, the Bachelor of General Studies (BGS) program offers an opportunity to finish their degrees at home.

Launched six years ago, the BGS program now has more than 1,700 admitted students and has graduated 181, nearly three dozen of them in April 2004.

“We talk to persons every day who think they are the only ones who left school after marrying or who stopped their university education after they had a baby,” says Ellen Rae Allred, ’72, who directs the BGS program. 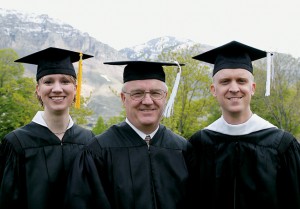 Thanks to the Bachelor of General Studies degrees, Darwin C. Rasmussen, ’04, graduated alongside his children Alicia, ’04, and Eric E. Rasmussen, ’02, in April. Photo by Mark Philbrick.

The BGS degree is a fully accredited BYU bachelor’s degree designed to help former students use as many previously earned credits as possible toward a current degree. Although it is a broad-based general studies program, the degree also gives participants an area of specialization. Students choose among eight emphases: American studies, English and American literature, family history, family life, history, management, psychology, and writing.

To qualify for admittance to the program, the student must have been away from BYU for at least two years, be in good academic standing, and have previously completed at least 30 hours of college work. BGS students can complete their remaining course requirements through BYU Independent Study, and they can also enroll in BYU evening classes, take courses at the BYU Salt Lake Center, and attend BYU during spring and summer terms.

Throughout their course work, students complete an analysis of their classes in light of the aims of a BYU education, and near the end of their schooling, they synthesize the information they have gathered and write a reflective paper.

“It is highly satisfying to read what earning this degree means to the BGS graduates,” Allred says. “I particularly remember one student who had felt bad for years, thinking that by leaving school without earning her degree, she had wasted the investment of tithing and scholarships she had received. Now she feels she has fulfilled her obligation and made good on the earlier investment through earning a degree.”

The Department of Independent Study unveiled what is believed to be the world's first course from a university on a PDA.