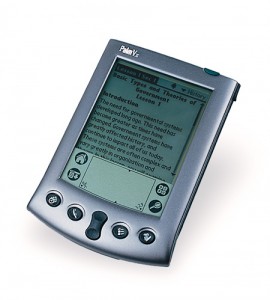 IN July 2001 the Department of Independent Study unveiled what is believed to be the world’s first course from a university available on a personal digital assistant (PDA). The high-school level course on American government is accessible through PDAs (such as the Palm series), cell phones with pocket PC capabilities, and traditional desktop and laptop computers.“We were the first in the nation to develop a totally integrated, fully functional course. We wanted to prove it could be done,” says R. Dwight Laws, ’85, director of Independent Study.BYU‘s Department of Independent Study has a history of using technology to improve its services. In 1996 the university introduced its first course based on the Internet. It now has dozens. Through the nation’s largest university-sponsored independent study program, BYU provides more than 600 university, high-school, and personal-enrichment courses to more than 50,000 people every year.Although the Department of Independent Study has plans to introduce other PDA-compatible courses, user’s reaction to the new format will be taken into consideration. “It is primarily a market test at this point,” Laws admits. “Having a dynamic interactive course in your shirt pocket is fantastic, but having to read the tiny screen is problematic.”However, Laws emphasizes the increased accessibility that technology, including the new PDA course, brings to education. “People can take the course with them wherever they go, submit their lessons, and get grading and feedback whether on a picnic or on a bus or wherever,” he says.