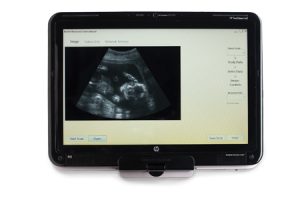 Software devised by BYU students could be useful for doctors in developing countries, particularly when there isn’t $300,000 for traditional ultrasound equipment.

Hospitals of the not-so-distant future may be able to say goodbye to bulky ultrasound equipment and its six-figure price tag, thanks to foundations laid by Carter D. Green (BS ’11), Robert L. Johnson (BS ’11), Paul R. Jones (BS ’11), and Craig K. Treasure (BS ’11) and their entry to Microsoft’s Imagine Cup, an international technology competition. This team of information-technology undergrads made a software application that allows doctors and technicians to view ultrasounds on tablet PCs and then store the images via cloud computing, cutting equipment costs from $300,000 or more to less than $8,000. And since two-thirds of the world has no access to ultrasound equipment used for obstetrics, cardiology, and more, the software could provide billions of people with better health care. “The results have been awesome,” says information technology professor Chia-Chi Teng. “They’re bringing technology to places where people need it.”

Competing in the Imagine Cup against more than 600 other teams, many made of PhD students, the BYU undergrad team made it to the country’s top 10 and went to the national competition in April 2011. They also won the competition’s People’s Choice Award by chalking up the highest number of online votes.

The Best of Buddies

Chetty Pino, the longest-standing buddy in BYU’s chapter of Best Buddies International, knows how to be a real friend.