He’s not a young wizard with a flashy scar, he’s not a little hobbit with a big mission—he’s Napoleon Dynamite, an awkward teenager from Preston, Idaho, with afro red hair and a skewed perception of reality. And he’s making a splash in the film world.

With 22 days and a $200,000 budget, a number of current and former BYU students, working alongside Hollywood professionals, set out last summer to make Napoleon Dynamite, a movie about a rural high-school boy dealing with typical high-school challenges, including getting a date for the high school dance and helping his friend run for class president.

“Jared and Jerusha were able to come up with something that was genuine and sincere and hilarious–and it was clean, too.” –Munn K. Powell

The movie, which was directed by former BYU student Jared L. Hess and stars current student Jon J. Heder, ’04, was accepted into the prestigious film festival, where it busted up both critics, who have described it as “gloriously quirky,” and audiences, who snatched up all tickets to every showing.

“It’s an anomaly, because there were all these hardened Hollywood types and their groupies who were just taken with the film,” says Tom J. Lefler, ’73, associate chair of the BYU Theatre and Media Arts Department, who attended the second screening of the film. “It was just a very, very exciting moment.”

But the success story doesn’t end there. Fox Searchlight, an independent arm of Twentieth Century Fox, which has released such films as Bend it Like Beckham and In America, purchased the movie for $3 million and plans to distribute it to theaters across the country later this year.

The unpretentious Hess, who based the comedy in part on his experiences growing up in Preston, says he “about dropped the phone” when he found out the film was accepted into Sundance. 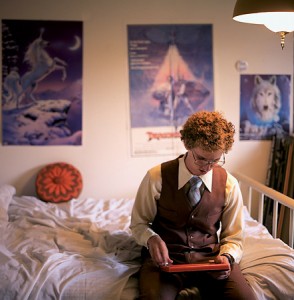 In Napoleon Dynamite, John Heder plays a quirky teenager from Preston, Idaho. The film made audience smile at Sundance and was later purchased by Fox Searchlight for $3 million. Photo by Seth Smoot.

Jerusha, who doubled as costume designer on the set, was less shocked by the film’s initial success.

“I was speechless, but it didn’t surprise me too much,” she says. “I think it surprised Jared a lot more. I was just so happy.”

What has surprised many of those involved with the project is that such a clean film—although everyone is quick to point out that it isn’t a typical “Mormon movie”—has received such wide acclaim with diverse audiences.

“I think what has happened with Napoleon Dynamite is that a young filmmaker . . . was able to say something about humanity, love, and affection in a completely different way,” says Lefler, who has worked with both Jared and Jerusha Hess in the film program. “They have pushed the boundary. It’s a valuable and needed illustration of how meaningful stories can be told.”

Adds cinematographer Munn K. Powell, ’97, “You’d hope that the kind of work LDS people would want to go out and make would be accepted by people, because I know that’s often the quandary of people in any creative endeavor—you’re kind of fighting the tide. . . . Even though I don’t think any of us set out to make an ‘LDS film,’ Jared and Jerusha were able to come up with something that was genuine and sincere and hilarious—and it was clean, too.”

How a bunch of BYU undergrads made themselves a dang cult classic.

Whatever results will not deviate far from what made the place so worthwhile and good in the past.