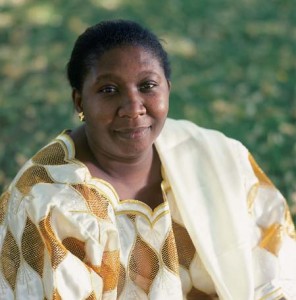 With persistence and courage, Toupta Boguena is paving her own road to success.

TOUPTA Boguena is a pioneer.Instantly putting her guests at ease with her soft-spoken manner, contagious laugh, and amiable smile, this BYU PhD candidate in integrative biology seems too gentle to have passed through circumstances that most would have considered insurmountable.Born in the war-ravaged African country of Chad, she still remembers well the four years she spent as a refugee in Congo. “We lived in hiding,” she recalls, her voice quieting to hardly more than a whisper. “I knew poverty and starvation firsthand.”But Boguena has never allowed her circumstances to limit her future. She has forged new trails and crossed long-recognized borders. Her first steps toward Provo were taken as she watched her father, Noida Boguena, an agronomist, working with poor African farmers. He was so successful that, besides inspiring his daughter’s career, the crop he introduced to Chad, the Taro plant, is still called “Boguena” in local dialects.But agronomy seemed an impossible goal, since there are no four-year universities in Chad and women are discouraged from seeking an education. An opportunity, however, did present itself.In 1986, a U.N. committee from New York traveled to Chad to interview applicants for five full-ride scholarships to American universities. At that time Boguena spoke three languages and several dialects, but English was not one of them. She applied for the scholarship anyway.Speaking through a translator, Boguena impressed the committee enough to earn a scholarship to the University of Arizona. Over the next 12 years, she learned English and earned bachelor’s and master’s degrees in agronomy. But something even more important, according to Boguena, happened in Arizona. On a whim, she decided to visit the local Church of Jesus Christ Spanish branch, where she was introduced to the sister missionaries. A few weeks later, she was baptized.After joining the church, she established connections with faculty at BYU, and in 1999, after being offered a research position by Susan Meyer, Utah Forest Service ecologist, she came to Provo to pursue a PhD. Under Meyer’s direction, Boguena is trying to find a way to use a naturally occurring fungus to control nonnative cheatgrass populations that have spread across the West. If successful, the fungus could allow native species to take hold again. This could in turn reduce the number of wildfires, since cheatgrass, which grows thickly and dries out by June, drastically increases the likelihood and frequency of such fires.When Boguena graduates this December and returns to Chad, she will be the first woman from her country with a PhD. But she’ll have little time to celebrate. Her country is still entangled in political turmoil, and she has no guarantee of a job. Yet Boguena remains optimistic.“I have something to give my community. It’s great to imagine helping the agricultural system.”With her new faith, Boguena also faces challenges of a different sort. “I am the only member in Chad that I know of. I’m really hoping that missionaries can come there one day. Until then, I’m mailing the Book of Mormon and the lessons home constantly. After I return, I see missionary work as one of my main focuses.”Despite the uncertainty of her future, Toupta Boguena is ready. “Nothing is impossible,” she states confidently, thinking of her role in her homeland. “As a Christian, I always believe that things can get better.”

BYU figured prominently in the life of Bryant S. Hinckley.

This alumna spreads awareness on the effects of autism.