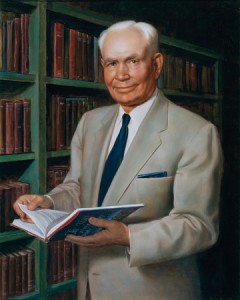 BYU figured prominently in the life of Bryant S. Hinckley. His portrait (above) will soon han in the BYU building named for his son Gordon B. Hinckley.

A brilliant orator and prodigious worker, Bryant S. Hinckley helped shape Brigham Young Academy just as he was shaped by his time there. His portrait will hang in the completed Gordon B. Hinckley Alumni and Visitors Center, named in honor of his son.

Born in Coalville, Utah, in 1867, Bryant spent his early years at Cove Fort, which his father settled at Brigham Young’s direction. Bryant’s father, Ira N. Hinckley, sent all 15 of his children, including Bryant at age 16, to BYA in Provo. There Bryant grew under Karl G. Maeser’s tutelage. He later wrote of Maeser, “He could stir the best that slumbers in the human heart and could transform boys into gentlemen if anyone could.”

As the winner of an oratorical contest, Bryant delivered a speech at his own commencement. He would continue to speak to congregations throughout his life, says grandson Clark B. Hinckley (BS ’71). “Grandfather was a very gracious man with this beautiful public voice.”

He continued his studies in the East before returning to BYA in 1893 to teach commerce and head the Commercial Department for most of a decade. Next he was off to Salt Lake City to lead the LDS Business College; he later managed the Deseret Gymnasium.

While Hinckley was principal at LDS Business College, his first wife, Christine, died and he married Ada Bitner, who taught English and shorthand at the college. Their first child, Gordon Bitner Hinckley, was born June 23, 1910.

Bryant Hinckley served in the presidency of the Church’s largest stake for 39 years (11 years as president), as Northern States Mission president, and on the YMMIA general board. He began the first stake-missionary program and often took part in curriculum writing.

When Gordon B. Hinckley was presented as a new Assistant to the Twelve in 1958, he paid tribute to his aging father, who had recently suffered a stroke: “If I feel any selfish satisfaction in this honor, it is the satisfaction that comes from the realization that one of his sons has been found worthy of the confidence of the Brethren. And if I feel any regret, it is that, unless the Lord rules to the contrary, he will not know of this in mortality. . . . No son ever had a better father.”

Of his father’s love of learning, President Hinckley once said, “Almost to the time he died, just short of the age of 94, he read and wrote and contemplated the knowledge that had come to him. . . . He never ceased to learn.”

Many of the themes President Hinckley has addressed have root in the writings of his father, who authored more than 30 books, including biographies, treatises on Mormonism, and doctrinal lessons. Bryant Hinckley’s writings admonish perseverance, dependability, enthusiasm, service, education, and faith.

Bryant Hinckley’s portrait in the new visitors center will join other campus reminders of his influence at BYU—a bronze bust in Hinckley Hall (a Helaman Halls dorm named for the Ira N. Hinckley family) and a Jesse Knight Building lecture hall that carries his name.

There’s an App for That

The BYU Mobile App's features include a self-guided tour to help students and visitors navigate a changing campus.