By Jacquelyn Youd Christensen in the Summer 2000 Issue 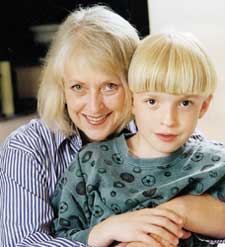 It was December, and the only thing BYU alumna JaLynn Rasmussen Prince needed in the craft shop were Christmas lights. Her son Madison was sitting in the shopping cart. And like any four-year-old child, he decided the balloons at the front of the store looked a lot more interesting than mere boxes of lights.

But, as Prince says, “I was winning—I was driving the cart.” She eased the cart past a woman picking out lights.

Madison had a different view. So he stood up in the cart, pointed at the front of the store and said, “Damn lights!”

The woman next to them shot a glare that said, “Can’t you control your child?” And Prince started crying—not because she was embarrassed (she doesn’t know where Madison got the expletive), but because her son had never said a two-word sentence before. Madison was born with autism.

There are about 500,000 people with autism in the United States, and more than half of them—281,000—are under the age of 21. Taking their family members into account, autism affects millions of people directly. The disorder commonly manifests itself in repetitive behavior, poor social interactions, and language difficulties.

“It was because of Madison that I was even persuaded to put together a portfolio to be considered as Maryland’s Mother of Young Children,” explains Prince, who lives in Potomac, Md. “If I won, I could perhaps give my silent son a voice—and for the first time, in a public way, focus our family’s involvement with autism.”

For her service to family and community, the BYU fine arts graduate was eventually honored not just as a representative for her state but as the 1999 National Mother of Young Children. The award was given by American Mothers, Inc., the official sponsor of Mother’s Day and Mother of the Year awards.

While she has long considered herself an activist, Prince’s national position has given her many opportunities to speak about autism and her family’s experience. Soon after being asked to represent Maryland at the National American Mothers convention, she connected with the American Autism Society, and she is now working to increase awareness about autism.

“With a lack of awareness or education, often people don’t have the opportunity of knowing individuals with autism,” Prince explains. “And you can learn so much from them.” Her son Madison attends an elementary school where there are two classes of children with autism. The arrangement “has opened the eyes and the hearts of many families,” she says. “When people understand this disability, they start to understand other disabilities.”

Madison, now 10, is the youngest under the Prince roof; Prince’s mother, 90, is the oldest. The household also includes her husband, Gregory, her son, Chad, 15, and her daughter, Lauren, 11.

This 80-year age range, says Prince, has taught her to see the world from another person’s viewpoint. It’s hard to understand the fears of someone who is aging, she explains. It is also hard to understand the needs of a son who can’t explain what he is feeling. To have empathy, she says, she has to step out of her own perspective.

For example, as a six-year-old, Madison loved Mickey Mouse. So when the family went to Disney World, they took Madison to meet Mickey. They thought he would love it. But when he saw Mickey, he started to cry. 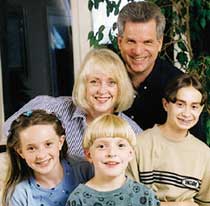 After they left he finally calmed down, and the Princes realized that for Madison Mickey had always been two-dimensional. Seeing a three-dimensional, larger-than-life Mickey Mouse was like seeing a favorite movie star unexpectedly, face to face, and being speechless. So they carefully explained to Madison what was going to happen, and he agreed to return. This time, he hugged Mickey.

Seeing the world from someone else’s perspective has been a theme of Prince’s community involvement as well as of her home life. For instance, as a part-time instructor for Johns Hopkins University’s continuing education program, she uses art and artifacts to teach about world religions. “If students are looking at a work of art, it’s nowhere near as intimidating for them to step into somebody else’s point of view,” she says. The current chair of the arts committee for the LDS Washington Temple Visitors’ Center, Prince has always loved the arts. While studying fine arts and theater at BYU, she says, she owned and directed the Pioneer Playhouse, a summer stock theater that competed with a then-fledgling Sundance theater. She met her husband in Los Angeles while she was consulting on a film and he was completing his doctoral degrees at UCLA.

Before she had children, Prince served as public relations director for the Bicentennial Council of the 13 Original States and as a broadcaster; she also worked on Capitol Hill. While rais ing her family she has continued to expand her capacity to serve. Believing that “education and family go hand in hand,” she has done homework alongside her children while working toward a master’s degree in theology from Wesley Theological Seminary in Washington, D.C.

“An educated mother can help today’s children understand the importance of making wise choices,” she says. “As we step into a global society, we can’t make naïve, uninformed decisions.”

Travel has also been important in Prince’s studies and her children’s education. When she participated in an archaeological dig in Jordan as part of her graduate work, she took an 11-year-old Chad. And last year she took Lauren and Chad with her to complete a photographic essay of religious sites in Asia.

“I’ve tried to utilize travel for Chad and Lauren,” she explains. “They have some of their options limited at home by virtue of having a brother with autism. So we travel.” Prince says that travel has opened her eyes about poverty and other issues facing families all over the world.

Prince’s national role this year has converged with her husband’s career in unexpected ways. Her husband, Gregory, is a scientist and the developer of two drugs that prevent and treat Respiratory Syncicial Virus (RSV), a life-threatening virus to which low- birth-weight newborns are especially susceptible. He has been working on RSV vaccines since he was at UCLA, but the research has come to fruition only in the last few years.

“Who would have thought when we were married that we would come to this point, both focusing on children in such a public fashion at the same time?” she says.

In her speeches, television interviews, and radio interviews, Prince has discussed many issues facing families. But autism is the cause she champions most frequently.

“I really have a strong view that your home doesn’t end at the walls of your dwelling,” she says. “Your home has to be continued outside, because your children go outside. And we owe it to them to go out there and to help in preparing other young people. It’s a very active, hands-on endeavor to be a parent. And you put your hands on things wherever your kids happen to go.”

Identifying autism sooner—especially in girls—could improve and even save lives.

Safeguarding the Siblings of Children with Special Needs

Families should know the potential risks, get support, and expand their faith.