By Elyssa Madsen Andrus in the Summer 2000 Issue

It’s 9:59 A.M., seconds before BYU’s Community Cable News begins its morning newscast. Student directors, producers, and camera crew are hustling to get things in place for the opening shot. Amid the confusion, Abdullah R. “Abe” Mills, one of the program’s weathermen, is scheming. Known for his newsroom stunts—he occasionally dons props like sunglasses—Mills loves to up the ante. Today he and the other newscasters are having a contest to see who can work the most song and movie titles into their on-camera dialogue. 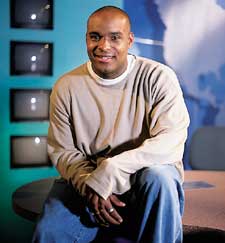 After relaying the day’s forecast, Mills motions toward Utah on the map. “Up here the weather is nice,” he says, and then points toward Mexico, which has experienced severe flooding. “But down in Mexico they are livin’ la weather loca,” he says, spoofing Ricky Martin’s hit, “Livin’ la Vida Loca.” At commercial break the newsroom erupts in laughter.

The humor is vintage Mills, who knows about the crazy life—the jam-packed, busy life—himself. Since beginning BYU, Mills has performed as a BYU Young Ambassador; spent three seasons on the football team; hosted the LDS teen news program Center Street;edited Eagle’s Eye,the magazine published by Multicultural Student Services; and reported on politics, arts, and weather for KBYU-TV. His collegiate career has spanned a decade (he took several semesters off) and has taken him from the football field to the stage to the newsroom.

In 1990 Mills came to BYU “to play Division I football,” he says. He walked on to the BYU team as a freshman and returned to the squad after his LDS mission. But during his mission in Houston, Mills found another interest. As an assistant to the mission president, he made short videos for missionary training, and the experience sparked his interest in film. When he returned to BYU, he reconsidered his goal of owning a sports park/video arcade and began pursuing a career behind, and in front of, the camera. He switched majors from business to broadcasting. And when three years of showing up for practice brought him no varsity playing time, he put away his football uniform.

Mills says a poignant moment for him was returning to the football field to shoot game footage for KBYU. He remembers, “Every time you walk on to the field you want to be on it playing.” Still, giving up football allowed him to focus on other talents.

With a seemingly undrainable well of energy, Mills infuses each of his activities with life and spirit. “He’s a very happy person—it’s infectious. You can’t work on a team with him without catching his excitement; it permeates what he does and pulls others along,” says Lynette Simmons, who handpicked Mills to edit Eagle’s Eye.

Whether covering Salt Lake’s mayoral elections for KBYU or interviewing LDS youth for Center Street,Mills says the people he meets make the hustle and bustle worthwhile. For instance, he learned a lesson about gratitude while visiting a North African hospital during a Young Ambassadors’ tour. “We visited children who were stuck in bed for weeks. We were singing ‘Circle of Life’ and when it was my turn to come in, I couldn’t. I broke down and was bawling. I thought, These kids haven’t had anything to be happy about,but when we sang a simple song they smiled.” The moment cemented his love of performing.

“In a performance people are able to touch other people,” he says. “That’s one of the reasons I love it so much—to make people laugh or feel the Spirit or just feel an emotion that maybe they have a difficult time feeling in any other way.” In the long run Mills wants to touch an even broader audience by creating documentaries about social issues like gender and race. “I like to look at an issue and see how it touches an individual or a family,” he says. “I think if you can get it down to a personal level, people will say, ‘I can relate to that.'”

Mills says that as a multicultural student at BYU he has the opportunity to promote tolerance and understanding. “It gives me an opportunity to be an example, to show people that you have to look at the individual and not place a stereotype on a whole group of people,” he says.

Like stereotypes, Mills shuns limitations, saying, “You can do anything you put your mind to.” Student, athlete, performer, editor, counselor, weatherman—Abe Mills has filled all those roles at BYU. And, as of April, he bears another description, this one a long time in coming: Graduate.