A World of Play for Zachary

Natalie Mackay Blakemore (BS ’00) knew something was wrong the day she took her 6-month-old son, Zachary, to a playground and placed him in a swing with a toddler seat. Unlike a friend’s baby, Zachary wasn’t strong enough in his trunk or neck to support himself. Blakemore went home in tears.

She had suspected that something was not right as Zachary kept missing developmental milestones. He could not pick up items, sit, or roll over. Blakemore’s doctor had recently begun a round of diagnostic tests to see whether he could identify the problem. 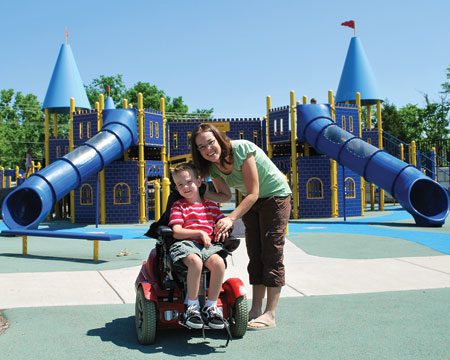 Frustrated that her son, Zachary, couldn’t enjoy traditional playgrounds with other children, Natalie Blakemore spent four years leading a community effort to create this playground for all children – with and without disabilities.

After the experience in the park, Blakemore says, “I told myself I never wanted to visit a park again. I was a recreation and youth leadership major at BYU, and my son and I could not even have that simple play experience.”

Eight months later, Zachary was diagnosed with a rare genetic disorder of the central nervous system. His brain was missing the insulation that allows nerve impulses to travel smoothly. By the time they get from his brain to his body, his signals are garbled.

The doctors were uncertain about Zach’s developmental potential. Natalie and her husband, Todd (BA ’01), were told Zach might never lean over, stand, or identify colors. They’d have to wait and see.

Slowly but steadily, Zach began to make progress. “When he passed a toy from one hand to the next, we had a party.” Now 8, Zachary attends a regular school and drives a powered wheelchair.

Despite the improvements, swings and slides eluded him. Whenever they visited a playground, the Blakemores would carry him around the park while his two sisters played.

“It broke my heart whenever Zach asked me why he couldn’t play like the other kids,” says Blakemore, who now lives in O’Fallon, Mo. “A park is the perfect place for children to socialize and connect with each other, and I hated seeing him sidelined.”

Zachary’s possibilities for play brightened considerably in 2002, when the Blakemores went to see family in Washington, D.C., and visited a fully accessible facility. “It had soft spongy surfacing that allowed Zach to use a walker, and it had ramps that went to the tallest slide,” Blakemore says. “I watched him play normally with other children and told my husband we had to move to Washington.”

Instead of relocating, they investigated the possibility of creating a park nearer to home. The Blakemores established Unlimited Play, a nonprofit organization, and Natalie began contacting surrounding cities, asking them if they would be willing to donate land for a park if she raised the money.

“I had been in charge of the Special Olympics at BYU my senior year and had learned about fund-raising and community resources,” she says. “I don’t think I would have had the courage to undertake this without my BYU background. I quickly learned whenever you say you’ll provide the funds, cities are eager to give you the land.”

Four years, many fund-raisers through local schools and other groups, and dozens of speeches later, the Blakemores opened Zachary’s Playground in 2007. They had raised some $800,000. Designed to minimize limitations, the park includes a castle with turrets, an activity boat, swings, a climbingnet, monkey bars, and more. Plans are underway to add a Braille trail. While designed for all children, a popular water sprayer was installed especially for Zachary to help regulate his body temperature.

“Natalie gave unselfishly of her time to assure that this playground came to fruition,” says Susan Fleming, executive director for the Recreation Council of Greater St. Louis. “Not only did Natalie do this for her son, but for all of the St. Louis–area children with disabilities, their families, and friends whounderstand the benefits of play and acceptance.”

“I felt this was something I was supposed to do, and whenever I got discouraged, I would imagine opening day,” Natalie says. It looks as if her imagination will be needed again. Two other cities have approached her to develop accessible parks for their children too.

Through sacrifice and consecration BYU can become a place where the Lord would be comfortable.

Playing Outside the Box