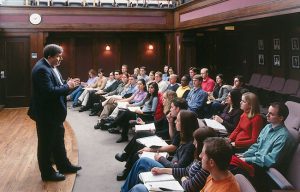 Faculty members’ willingness to share their wealth of knowledge with students is helping BYU become a consecrated place.

By Elder Henry B. Eyring

Through sacrifice and consecration BYU can become a place where the Lord would be comfortable.It is useful to put a picture in our minds and hearts of where we are headed at BYU and why we are going there. That is easier to do at BYU because living prophets of God have described our possibilities. I have studied two of those pictures of the future. The two views combine for me to make more clear what we should do and who we must become.President George Albert Smith ended his remarks at the first dedication of the Eyring Science Center on Oct. 17, 1950, with this prayer and blessing:Oh, Father, bless the men and the women who are on the faculty of this great school that they may teach . . . under the influence of Thy Spirit, that they may be able to inspire the . . . men and women with the desire to be worthy to be called Thy children. Bless them that they may see the fruits of their labors, . . . that they may look over a field of Thy sons and daughters who have been developed to be worthy to live with Thee. [BYU Archives]That picture of our students worthy to live with God might have seemed to be in some distant future, in the world to come, if I had not next read this from President Spencer W. Kimball’s second-century address (“The Second Century of Brigham Young University,” Speeches of the Year, 1975 [Provo: BYU Press, 1976], pp. 250–51):We must not lose either our moorings or our sense of direction in the second century. We still have before us the remarkable prophecy of John Taylor when he observed:

This article is condensed from an address given by Elder Henry B. Eyring, a member of the Quorum of the Twelve Apostles of the Church of Jesus Christ, at BYU‘s Annual University Conference on Aug. 27, 2001. The full text is available at speeches.byu.edu/auc/01AUC_Eyring.html.

Sometimes a student just needs to get away.

Compelled by stories of handcart pioneers’ faith and courage, Scott Lorimer and his stake completed 4,000+ ordinances.

Sometimes the heart and the mind don’t learn at the same pace.