A Steady Diet of Images

A BYU communications professor studies the link between media use and teen eating disorders.

Lose 10 Pounds Before Prom!
4 Steps to Becoming a Better Kisser
Minimize Your Thighs!

“We’ve all skimmed the headlines while waiting to pay for our groceries,” says communications associate professor Steven R. Thomsen, ’82. While these magazines may provide little more than a check-out line diversion for most shoppers, Thomsen notes that the top women’s beauty and fashion magazines maintain a captive readership of 1.6 million young women each month. 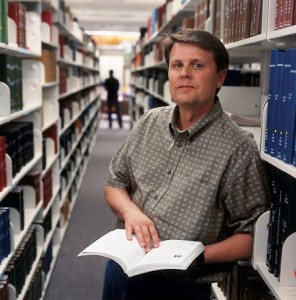 “I’ve always been interested in how the media shapes one’s identity, one’s sense of self,” Thomsen says, “particularly in adolescents and teenagers. As they develop socially, young people are especially vulnerable to the suggestive ideas that exist in the media.” Although he has also earned grants—including a Fulbright grant to research in Norway—to study how the media influence adolescents’ drinking habits, Thomsen’s most well-known and voluminous research focuses on how women’s beauty, fashion, and fitness magazines help create and sustain eating disorders in some young women.

“Many young women who have a steady diet of these publications eventually embrace the belief that social acceptance or desirability is based on their appearance,” Thomsen says. In response, the young women often turn to the magazines to discover what a woman “should” look like. But these images are deceiving, Thomsen says. “Their body shape and proportions are very rare in humankind,” he says, noting that achieving the “ideal” image is often possible only through “airbrushing and medical reconstruction.” Nevertheless, many young women accept these images as the norm, and, Thomsen adds, “they feel like, ‘If I don’t possess that, I had better find a way to get it.'” Failure to attain an impossible ideal can be devastating for some young women, he says, and has led many young women to eating disorders.

“But not every woman who looks at a beauty and fashion magazine develops an eating disorder. It isn’t an absolute relationship,” Thomsen says. In his research, Thomsen found that study after study had shown that there is some kind of connection between media use and eating disorders. “But we wanted to know why,” says Marleen Eggett Williams, ’87, associate professor of counseling at BYU and coauthor of Thomsen’s first study. “Why one girl and not another? What are the factors that can predict if a girl will turn to an eating disorder?”

For some answers, Thomsen approached the Center for Change, an eating-disorder treatment facility, with a proposal to study how anorexic outpatients had used women’s magazines to perpetuate their eating disorders.

Predictably, Thomsen found that many of the anorexic outpatients talked about the strong influence of the images in the magazines. Many related that they cut out the pictures of models and pinned them onto their walls or filed them neatly in folders. One young woman described using these cutouts for “comparison rituals,” in which she would look at the pictures and carefully compare her body to the model’s body as a motivation to lose weight.

Thomsen was surprised, however, when the young women told him how they responded to articles about the dangers of eating disorders. “I somewhat naively thought that it might trigger a fear in them when they realized they had embraced this extreme behavior,” Thomsen says. But he couldn’t have been more wrong. One young woman reported that she had not been able to make herself vomit, so she scoured articles about eating disorders, looking for hints. “If a magazine said, ‘Bulimia Ruined My Life: A True Story,’ I would read it just to find ideas.” Another girl found the stories inspiring. “If the article said she weighed 88 pounds, then I knew I could do 87,” she said.

The media’s approach to eating-disorder education, Thomsen says, is just like their approach to advertising. Instead of focusing on the somber, emotional pain of the girls’ experiences, Thomsen says, the media sensationalize their stories with dramatic statistics and images.

“The problem,” Thomsen explains, “is that the media exist first and foremost to make money, and they do that through advertising dollars.” And right now, he adds, the stick-thin image sells. Although some magazines have tried to counter this image by using more realistic models, he says that this approach is not an industry-wide trend. “Unfortunately, doing good for goodness’ sake is not a huge incentive in our current system.”

In Thomsen’s study of anorexic outpatients, he found that many young women turned into magazines because they were full of simple equations for perfection.

For instance, Thomsen has discovered that, by understanding the young women’s motivations for reading the magazines, he could identify several reliable predictors for eating-disorder vulnerability. In his study with the anorexic outpatients, Thomsen found that many of the young women turned to the magazines because they were full of simple equations for perfection—how to get the “perfect” boyfriend or the “perfect” body. “Likewise,” Williams says, “the girls tried to be ‘perfect’ through their eating disorders.”

Thomsen also found that many young women turned to the magazines for comfort because the slender models and dieting tips counteracted their parents’ and friends’ assertions that they were too thin. “Seeing successful, famous women who are portrayed as extremely thin makes it easier to distort the painful reality of having a psychological disorder,” Thomsen’s research states.

Out of this research Thomsen and his colleagues created a worksheet for therapists to help evaluate their patients’ ability to process experiences with media. And many eating-disorder programs, including the Center for Change, cite Thomsen’s research in their programs that teach media literacy. Thomas O. (Paul) Harper, ’76, education director at the Center for Change, says, “We have used ideas from Steve’s research as we teach about media literacy, both with our patients and in our outreach programs for schools and professionals.” 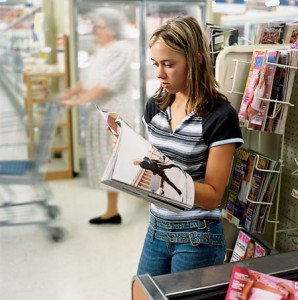 The subtle – and not-so-subtle – messages of popular teen magazines create an impossible ideal for young women to compare themselves against, says Thomsen. Photo by Bradley Slade.

After nearly seven years of research on this topic, Thomsen remains enthusiastic and passionate about his work. “Eating disorders are a devastating problem that affects a large section of our population. It affects our mothers and our daughters, our friends,” he says. “I am driven by a desire to help the women and their families avoid the pain and frustration that accompany eating disorders. And we have a long way still to go.

“When I finished defending my dissertation,” Thomsen recalls, “my dissertation chair congratulated me and then said, ‘You know, you’ll never be a real professor until you have something to profess.'” Now, 10 years later, Thomsen says he is beginning to understand the truth of that statement. “If the end result to these many years of work is that my research can raise awareness of this issue and continue to point us to issues in ways we have not thought about before, then I will consider myself to be a professor. Only then I will truly have something to profess.”

Liza Richards is an editor for ADP Benefit Services in Salt Lake City.

A Passion for Placing People

Greenhalgh has helped students and alumni connect with their future employer.

There is trouble lurking beneath the surface of Utah Lake—an estimated 30 million pounds of trouble.

For centuries, people have wondered how to picture a mysterious creature from Japanese folklore—until now.