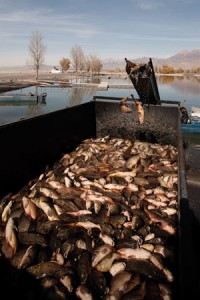 There is trouble lurking beneath the surface of Utah Lake—an estimated 30 million pounds of trouble.

That’s the combined weight of the more than 7 million carp that make up 90 percent of the lake’s fish population, and this staggering majority has not been peaceful. Carp have ripped up much of the vegetation that once thrived along the lake bottom. They stir up large amounts of phosphorous, which forms concentrated algal blooms throughout the lake and causes a stink that Utah Valley residents notice from time to time. Carp also destroy the habitat and eat the food and babies of the endangered June sucker, a much smaller fish indigenous to Utah Lake.

“If we don’t remove the carp, Utah Lake will continue to be a shallow, turbid, carp-dominated lake,” says Mark C. Belk (BS ’85), professor of biology at BYU. For 10 years Belk has served on the June sucker recovery technical committee, a group researching the conditions required for the June sucker to thrive. “The lake is a pretty tough place to make a living right now for the June sucker,” says Belk. “There are many problems, not least of which is the carp.” 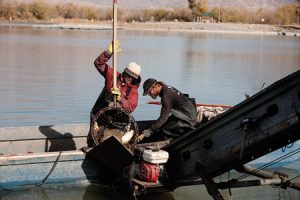 Thirty million pounds of carp will be removed from Utah Lake to help restore the habitat of an endangered species.

In 2002 an environmental consultancy group concluded that carp were the most damaging aspect of the lake’s habitat, and the June Sucker Recovery Program was founded. “The June sucker is our indicator species,” says Michael D. Mills (MA ’04), the program’s coordinator. “It’s like the oil light in your car. You don’t have to add oil right away, but if you ignore it, over time things will get worse. The fact that the June sucker is struggling is our oil light.”

Now, with federal funding, Mills is charged with removing the 30 million pounds of carp that have disrupted Utah Lake’s once-balanced ecosystem. Mills has secured funding for year one of a six-year plan to fish the carp out. Commercial fishermen trawl the lake, removing 20,000 pounds of carp on a good day. While they won’t catch every last carp, they will significantly reduce the population so the June sucker can thrive. Maintenance fishing every three to five years will be necessary to regulate carp growth.

But what to do with all that carp?

Mills sent out a request for researchers to propose ways the captured carp could become a product to help offset removal costs.

Richard O. Kellems (BS ’69), a recently retired BYU professor of plant and wildlife sciences, offered a solution that Mills would like to see happen: liquefy the carp and sell the product.

“The process is not very expensive,” says Kellems. “You grind the carp up, and the enzymes in the fish will actually digest the fish. Once they’re liquefied you can do a number of things with them.” The carp could be used as fertilizer, a base for a trout diet, or a pet food ingredient. Mills says this would work great for the program; so far, no investors have stepped forward to build a facility for liquefying the carp. For now the carp feed mink on a farm near Payson, Utah.

A new BYU study has shown that mosquitofish, like this one, have become predators of Utah's native fish.

From Cancer to the Book of Mormon and Back

A BYU stats professor is furthering cancer-tumor classification—and using the same science to defend the Book of Mormon.