You Are What You Do

While working on bachelor’s and master’s degrees in psychology, Terry R. Seamons (BS ’64, MS ’66, PhD ’72) says he did “OK with minimal effort.” But when he returned to BYU to earn a PhD in school psychology, minimal effort “didn’t work for me anymore.” 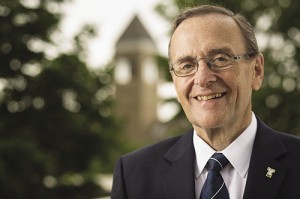 During his doctoral studies, he took inspiration from a saying that later he shared in an address to spring 2014 graduates:

You are what you do;

You do what you choose;

Then change what you do.

With that philosophy, his approach to education shifted in two significant ways: “I decided to sit on the front row of every class in front of the instructor and…do the assignment as soon as it was given rather than put it off.”

More than 40 years later, as he enters the beginning of a two-year term as BYU Alumni Association president, Seamons is reflecting on a similar lesson he found in A. A. Milne’s Winnie-the-Pooh. The story begins with Winnie descending a stairway on the back of his head—“bump, bump, bump”—dragged along by his friend Christopher Robin. Milne writes, “It is, as far as [Pooh] knows, the only way of coming downstairs, but sometimes he feels that there really is another way, if only he could stop bumping for a moment and think of it.”

In his address to graduates, Seamons asked, “How many of us are like Pooh? We get so stuck in a rut with the things we do and the decisions we make that we don’t realize there are other alternatives from which we can choose.”

In his new role with the Alumni Association, Seamons offers himself the same word of caution. “Under my watch, we will need to be precise about the value we bring to our alumni,” he says. He is already collaborating with board members by examining current outreach efforts and exploring fresh ways to maximize their effectiveness.

Seamons, who has spent most of his career as a consulting psychologist working with business executives across the country, says he is proud to be a BYU alum, particularly since “my experiences at BYU had a profound impact on my life.” And for fellow alumni, he’s hoping to extend the reach of BYU’s impact beyond their on-campus experiences.

“I’d like to help facilitate experiences that will generate real value,” he says.

New leaders take the reigns with much to offer to BYU.

Each fall, the Alumni Association and the Cougar Club offer a tour to an away football game, generally in the East.