By Charlene Renberg Winters in the Summer 1999 Issue 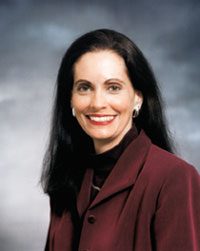 After graduation Diana Peterson thought the BYU phase of her life was over. But as the new Alumni Association president, this accomplished musician and mother of seven hopes to help alumni connect with BYU and with each other.

WHEN Diana Hulme returned from a BYU semester abroad in France at the end of her sophomore year, she discovered that in her absence her fiancé, Joel Peterson, had made a deal with her parents: he would wait to marry Diana until she had graduated.

Twenty years later, however, Peterson returned to serve on the Alumni Association Board, and on April 2 she became its new president. She has long recovered from cramming two years of study into one and says being a student at BYU gave her the framework and background to pursue a lifetime of learning. She hopes some of her experiences will help her in her new position.

“We lived in Paris, for example, after Joel finished business school at Harvard. I had studied humanities and graduated in French,” Peterson says. “Suddenly I was surrounded by all the history, culture, and art that I had read about at BYU. I was a new mother and would strap my baby onto my back and walk through Paris. I got the Michelin guidebook, 36 Paris Walks, but it did not begin to answer my questions. In Paris I realized that I wanted to continue to educate myself and that learning was one of the great passions of my life.”

That thirst for knowledge is now focused on her new responsibilities. “Although I did not know much about the Alumni Association when I first joined the board, I have immersed myself in studying it–everything from the mission of BYU to the student experience to the administration’s goals for alumni,” she explains. “It has really become a focus of my thoughts and energy. I feel there are things I can do that will make a difference to alumni–and to BYU’s mission being fulfilled better through its alumni.”

Peterson says this is an ideal time to serve BYU. After living for several years in the San Francisco Bay area and in Dallas, the Petersons returned to Utah three years ago with their seven children. Their oldest two daughters are BYU graduates, and all of their five younger children have enjoyed some BYU programs. (“Incidentally, all my brothers and sisters graduated from BYU, too,” she says, “but not all before they were married.”)

Being in Utah has also given Peterson the chance to be part of the Mormon Tabernacle Choir and continue a lifelong love of music.
At BYU she sang and toured with the A Cappella Choir, and her student employment experiences focused on music. She taught piano lessons, accompanied the late Margaret Woodward’s children’s chorus, and accompanied and taught a blind BYU student majoring in vocal performance. Peterson had qualified for a prestigious music scholarship, but her 4.0 average and National Merit Finalist status yielded her the more substantial Maeser scholarship.

Not surprisingly, her connections with BYU before joining the board often dealt with the arts.

“I remember working really hard selling tickets when the BYU folk dancers and others came to California, for example, but I wasn’t aware that such events were possible because of alumni chapters,” she explains.

However, after participating in a focus group about alumni chapters, she realized that she could do more. By joining and supporting local chapters, she says, alumni can help make BYU a force for good in their communities.

“I want alumni to realize they can make a difference,” Peterson says. “We can all help, by providing replenishment grants and scholarships for the potential BYU students living in our chapter boundaries, by helping students prepare to come to BYU, and by planning events that connect people to BYU or serve the community.”

Peterson thinks of her two-year term as a two-year mission. As Alumni Association president, she wants most of all “to help alumni connect to each other and to BYU.” To that end, she hopes to strengthen local alumni chapters and enhance communication venues. She believes the new Alumni Association Web site has especially strong potential for helping alumni communicate with each other and the university.

“The relationship alumni have with BYU is lifelong and two-way,” she says. “I was inspired when I realized that BYU could continue to be an influence in my life far beyond the schooling years. One of my goals is getting our alumni to feel the same way.”

Catching up with Former Rhodes Scholars

See what's important to these scholars and what they doing years after graduation.

Rumors about the maze of passageways beneath BYU’s sidewalks circulate among students.