By Megan Vandre in the Summer 1999 Issue

So you really want to go down there?” Cliff Alleman asked. When I nodded, the director of BYU’s Heating and Cooling Plant sighed and shook his head.

“There’s nothing really that interesting about the tunnels,” he said matter-of-factly. I didn’t budge. “OK, then. Let’s go,” and he grabbed a flashlight from the wall.

“This is it,” I thought. “I’m finally going to see what few students have ever seen–the tunnels.”

Rumors about the maze of passageways beneath BYU’s sidewalks meet students upon arrival. Seniors speak in low voices of the underground cloisters, planting questions in freshman minds: Why does snow melt more quickly on some sidewalks than on others? Why do the vents near the Kimball Tower blow warm air?

As freshmen become upperclassmen, hopes increase that the rumored tunnels might actually exist. And although most students never see the tunnels, they all develop a sort of faith. By senior year they have heard stories–legendary or actual–of underground exploration, and they no longer doubt the tunnels’ existence. 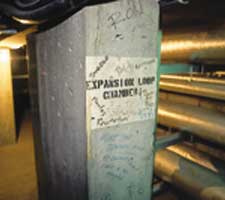 Now in my senior year, I was getting a first-rate tour to investigate the rumors. What I found was both real and fictional. The tunnels do exist. They connect buildings all over campus, from the Brimhall Building to the Museum of Art, from the Smith Fieldhouse to the Lee Library. The reason for their existence–to maintain water lines and wires–is practical and not unusual. But their presence feeds the legends, which are the key to the tunnels’ mystery and fame.

When I heard the stories, I always wondered how the explorers got inside. I imagined an entrance like the sewer grate in Les Miserables–a dark hole covered by rusted ironwork and overgrown vegetation. To my surprise, Alleman led me to a cement staircase followed by an ordinary door and a thin, but locked, metal gate with a “No Trespassing” sign. He noted, though, that most unauthorized explorers came in through manholes.

“Watch your head and step through,” Alleman told me, and I found myself in a crowded cement passageway, the home of communication cables and bulbous pipes carrying 300,000 gallons of 400-degree water. The dull, gray corridor was about 6 feet tall and 3 feet wide. I had expected a sewer, but the tunnel was dry and clean, with a musty smell and the dull roar of coursing water. I had also expected total darkness, but with a switch Alleman flooded the tunnels with fluorescent light. For a moment I thought his concerns about an uninteresting subject were justified. But my interest renewed when he began to tell tunnel stories.

The first tales came with the graffiti. Three-inch handwriting samples were scattered across walls and pipes, clustering around tunnel intersections, on direction signs, or on cement slabs near occasional alcoves. Plant workers had left their “December 1998” mark by groups from ’88 and ’89. A social dialogue of faceless voices accompanied each blue or black entry. Some writers claimed they were first (the earliest markings I saw were from 1975), only to have their declarations crossed over by explorers who said their underground jaunts had begun earlier. One marking proclaimed the writer a seven-time cave master–never caught or fined the $300 penalty. All marks challenged the tunnel keepers, daring workers to find the trespassers.

Alleman bemoaned the student explorers because of safety concerns about scalding pipes and electrical wires. Also, potentially harmful plumbing hangs from the ceiling or projects from the floor, Alleman explained as we reached a shorter part of the tunnel and began to stoop. Because of those pipes, “you don’t want to be down here when the lights go out.”

His caution came with good reason. A few years ago, Alleman said, he grudgingly allowed a student film crew to work within a restricted area. One student decided to go exploring, fell against a hot pipe, and was burned. The film crew was dismissed.

We roamed as far as the Smith Family Living Center and stopped under a manhole in a dirt-plastered room. A ladder ascended to the manhole cover, fastened like a suction jar. From my vantage point I could see patches of electric blue sky, and each time a car drove overhead I had the sensation of being run over. I watched the cars’ undersides clank by. Then I listened. Overhead, students with faraway voices walked past, oblivious to the world beneath them.

Later I stood under the fan grates northeast of the Kimball Tower, realizing I had once lingered there on a cold day, when the fans blew heated air from the tunnels. “No one up there knows I’m down here,” I thought. I relished my access to this secret and decided the amateur spelunkers must have known the same feeling. That’s why they left their marks, passing on the legacy of the tunnels in blue etching.

“There’s nothing really that interesting about the tunnels,” Alleman had said, and at first glance I might have decided that was true. But voices echoing from tunnel walls told me otherwise.

Study Says Men and Women Are not Worlds Apart after All

Spangler has just finished a study that proves false a popular theory in clinical psychology.

Edwards to Retire After 2000 Season

What has changed for Jared L. Hess ('02), since the release of his film Napoleon Dynamite?