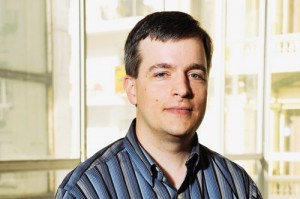 Michael Snow served for two years as chair of Wikipedia’s governing board.

As Michael A. Snow (BA ’98) was surfing the Internet in 2003, he became intrigued with a relatively new site called Wikipedia, created in 2001. Little did he know it would grow into the world’s largest encyclopedia, that he would be one of up to 100,000 volunteers, and that he would someday be chair of its board of trustees.

“I had never seen anything like it,” he says. “Here was a Web site that was established so it could not only be read by anybody, it could be edited by everyone as well.”

The information and creation of the site appealed to Snow: his degrees in political science, history, and law reflect his broad interests; as an instructional designer he spends his days writing, editing, and communicating. “As I read entries, I would tell myself, ‘I can fix that mistake,’ and, ‘I can improve the writing.’”

As he worked to improve Wikipedia entries, Snow began communicating with others working on the site. His contacts grew, and eventually he was asked to serve in a volunteer position as chair of the board of Wikimedia, the foundation that operates Wikipedia. Part of his strategic plan as chair was to reach out to the developing world to increase its involvement in Wikipedia. He finished his two-year term in July 2010 and now serves on the board of advisors.

“I am a lawyer by training, and I think that gives me a perspective on how to balance opposing positions,” says Snow, who is a strong supporter of Wikipedia’s neutral point of view. “I like to get involved in areas where people are having disputes about the content of a particular article and try to sort those things out and emerge with resolutions.”

Students from The Daily Universe and KBYU collaborated to create the daily news site @BYU Newsline.