Why Walk When You Can Fly? 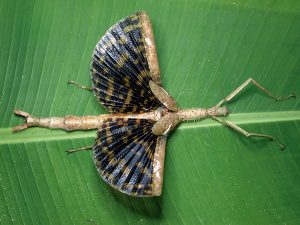 A new BYU study found that walking stick species like this foot-long Phasma gigas, native to Papua New Guinea, re-evolved wings after losing them 50 million years earlier. This is the first time any organism has been shown to re-evolve a complex trait.

WHEN Taylor J. Maxwell, ’00, signed on as an undergraduate research assistant in Michael F. Whiting’s laboratory, he had no idea his new job would one day lead to him publishing with Whiting a major discovery in one of the world’s top two scientific journals. “When I started this project, I just wanted to get some research experience that would help me get into graduate school,” says Maxwell, now a graduate student at Washington University in St. Louis. “I never thought I would end up co-authoring a paper in Nature.“Whiting, ’90, an assistant professor of integrative biology, and Maxwell found that members of a certain group of insects lost the ability to fly and then re-evolved it 50 million years later—a conclusion that means the theory of evolution itself must continue to change. They analyzed the DNA sequences of 35 species of walking sticks to decipher which evolved first. Their findings, reported in the cover article of the Jan. 16 edition of Nature, showed that some species of walking sticks without wings existed before their winged descendants, the first time any organism has been shown to do what scientists previously thought impossible—re-evolve a complex trait.“For complex functions like flight or sight, the idea in evolution has always been that organisms either use it or lose it,” says Whiting. “This is the first example of a complex feature being lost and recovered much later in an evolutionary lineage. Even though the wing is not physically there, the underlying genetics which construct wings appear to be conserved over evolutionary time.” Entomologists have frequently documented cases where species of insects have lost the ability to fly. Many insect species that migrate to islands eventually lose wings as an adaptation to keep them from blowing into the sea. Whiting reasons that walking sticks lost wings because doing so helped them blend in with their surroundings. He also noted that wingless insects have been shown to lay more eggs than winged relatives, which could have been important for walking sticks, which often drop eggs to the earth from their treetop homes instead of burying them in the ground like similar insects do. Creating more eggs gives the wingless walking sticks a greater potential to pass their genes to the next generation. “At least 50 million years later, for some reason, it was to their advantage to have some of the species become winged again,” Whiting says, noting that various species of winged and wingless walking sticks now exist. “The remarkable thing was that they had the ability to generate wings when they needed them.” The walking stick project began when Whiting, an entomologist with a $1.34 million grant from the National Science Foundation (NSF) to construct the family tree of the insect class, asked Maxwell to sequence and analyze the DNA of several species of walking sticks as part of the broader study. Maxwell, supported by grants from BYU‘s Office of Research and Creative Activities, put together preliminary results. After more BYU undergraduates sequenced DNA markers from each of the samples, Whiting used BYU‘s Fulton Supercomputing Facility to crunch through the complicated comparisons required to evoke the relationships among the insects. Maxwell is now applying the concepts and techniques he learned in Whiting’s lab to his current research into genetic issues related to cancer drugs in a doctoral program at Washington University. He earned an NSF Fellowship coming out of BYU, a virtually all-expenses-paid ride through graduate school that he believes he earned in large part because of his undergraduate research experience. “I was interviewed at each grad school I applied to and got accepted to each place, and it was mostly through Dr. Whiting’s efforts. I’m very grateful that Dr. Whiting gave me the opportunity, and that he spent so much time mentoring me,” Maxwell says. “He’s still a mentor. We’re very good friends.” Like other scientists at BYU who study life on Earth, Whiting draws support from statements made by Church leaders. “By studying the complexity and diversity of the Creation, we can better appreciate the Creator,” he says.

Evolution on Display at BYU