War Stories: Bird Out of Water

Laura Dowding Leseberg, ’77, an ROTC office specialist at BYU, still nervously watches the televised coverage from Iraq. Her eyes are riveted on images of the sandy, barren backdrop of the U. S. Army encampments. She is searching for a pink flamingo in the middle of the desert—a sign that her daughter Sarah is alive and well. 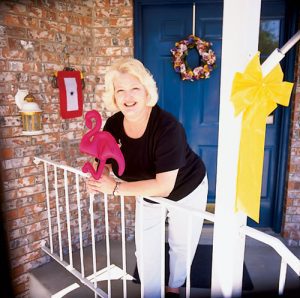 Laura Dowding Leseberg is an ROTC office specialist at BYU and waits her daughter Sarah’s return from Kuwait. Photo by Bradley Slade.

The brightly colored bird enjoys a long history among the Lesebergs. What began as a “tacky joke” twenty years ago has evolved into a humorous family tradition.

Her daughter, Captain Sarah Leseberg Ralston, ’99, purchased a set of plastic flamingos and sent them to her mother last fall. Ralston, a patriot missile launch officer, was stationed in Korea on Sept. 11 and had been on two-hour alert ever since the terrorist attack. When she was deployed from Fort Bliss in February 2003, she took an identical flamingo with her to Kuwait.

Ralston promised to stake the flamingo outside her tent in the hopes that her family would spot a flash of pink amidst the sea of green uniforms and sunburned faces. “I am quite sure that Sarah is the only soldier equipped with an inflatable flamingo,” says her husband, Capt. Robert Ralston.

Meanwhile, her family members scour the papers and devour Ralston’s letters from overseas. As of yet, no one has seen the fluorescent signal of safety in the news.

Leseberg’s husband, Mel C. Leseberg, ’73, graduated from the BYU Air Force ROTC program, and the family lived on military bases all over the world before his retirement. Sending a child into battle is different, however, than sending one’s husband, says Leseberg. “I never dreamed that I would send my baby girl to war.”

Leseberg remembers how eager her daughter was to join Operation Iraqi Freedom. “This was exactly what she trained for; this was her dream.”