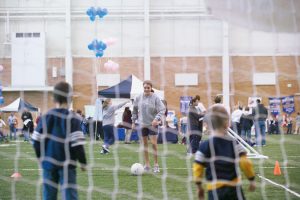 Bobbi B. Tillotson, ’07, engages in friendly competition with aspiring young soccer players at BYU’s celebration of National Girls and Women in Sports Day. The Twelfth Team, a group of volunteers who’s goal is to increase visibility for BYU’s women athletics, hosted the February event, which was held in the indoor practice facility and was open to the public. Photo by Michael Stanfill.

But BYU’s Twelfth Team is out to change that.

This group of more than 100 volunteers, founded nearly two years ago, is on a mission to increase visibility and recognition for BYU’s women athletes.

“We have an amazing group of teams,” says Elaine Michaelis, ’60, director of women’s athletics. “We just need to get that message out.” Michaelis founded the Twelfth Team, which got its name by joining BYU’s existing 11 women’s athletic teams.

The team’s primary goal is to increase “fans and funds,” says Janette L. Penfield, ’03, assistant to the athletic director, who also oversees the team. And so far, these volunteers seem to be high scorers. Attendance at BYU women’s sporting events increased by about 40 percent last year, according to Michaelis.

“Every year our teams compete at the top of Division I with numerous champions and All-Americans, and it’s important that we support them,” says Penfield.

To continue boosting support for the athletes, the Twelfth Team hosts various organized fund-raisers, including auctions and a Homecoming run. In addition, says C.J. Baker, an actively involved teammember, “there’s also a lot of word-of-mouth work.”

The volunteers are divided into 11 teams, each representing one women’s sports team, and they work to get friends, family, and ward members out to athletic events.

“I love BYU sports, and I wanted to help women’s athletics because they don’t get a lot of recognition,” says Baker, who works with the volleyball Twelfth Team. “They are terrific athletes.”

“There’s a group of people that care about them as a team and individually, and I think that’s a huge plus for our female athletes, to know that what they do doesn’t go unnoticed.” –Janette L. Penfield

Janette Hales Beckham, ’69, former Young Women general president for the Church, has been involved with BYU athletics for a number of years and, 20 years ago, was the only woman on the Cougar Club board of directors. But she points to her church service as a major motivating factor for her work with the Twelfth Team.

“When I was working with youth, I became aware that young people who were involved in sports had a healthy feeling about themselves,” she says. “I think the awareness of what women can do in their lives helps young people to be motivated to get involved in healthy physical activities, and there are so many opportunities now for women.”

Both Michaelis and Penfield are quick to credit the team for raising this awareness and motivating the community to support women’s athletics.

“I think the coaches and athletes feel a greater sense of support from the community,” says Penfield. “There’s a group of people that care about them as a team and individually, and I think that’s a huge plus for our female athletes, to know that what they do doesn’t go unnoticed.”

Adds Michaelis, “They’ve just done a great job. They help more people to understand the quality of the programs at BYU.”

You want to see these star-explosion leftovers.

Something Different on a Weeknight

SAB sponsors events on Wednesday and Thursday nights in the WSC for students looking for a break from homework.