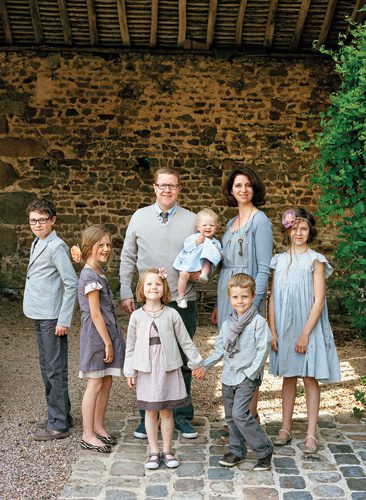 Gabrielle Blair and her family display their fashion at their home in France. Blair’s blog DesignMom.com, which blends parenting and design, has received high commendations.

Gabrielle Stanley Blair (BFA ’98) was on Twitter when she learned Time magazine had named her website one of the best of the year.

“I remember getting many congratulations,” she says. “I started digging and found the Time magazine link. It was about websites in general, and I was honored in the parenting category. I was the first website and only blog listed.”

As flattered as Blair was for the recognition, being acknowledged is not new for the blogger. The Wall Street Journal, Better Homes and Gardens, and the Martha Stewart Show have all listed her site as a top parenting blog. Among others, she has been HGTV’s blogger of the month, and Ladies’ Home Journal listed her among the 15 most influential bloggers in social media. In fact, a list of her honors fills an entire page at DesignMom.com, the blog she started five years ago.

At the time Blair had no idea her website would evolve into a full-time business. She had just given birth to the fifth of her six children and knew if she were not doing something creative, her postpartum depression would get the better of her.

“I was trained as a graphic designer, and typically after I gave birth, I would return to design either full time or freelance,” she says. “After my fifth baby, however, even committing to getting dressed and meeting a client was more than I could do. I told myself I needed to find something I could produce in my pajamas, if necessary.”

Blair decided to create a blog for a few reasons: she could begin one without spending a dime; she could use her design skills; and if she did not like the results, no one needed to know about it. “We were in graduate school and living in New York City on a very low budget. This was a perfect fit.”

Choosing parenting as a primary topic was natural for her. She also thought about the friends and former coworkers her age living in New York.

“They were just getting married and thinking about settling down with their first child,” she says. “I had five kids and thought they could look to me for help. I especially believed it would be a great place for women to validate each other. I’m a real advocate for blogging. If you have a day without tantrums, for example, or you happen to find a pair of shoes on clearance in your 4-year-old’s size, the New York Times isn’t going to care. But when you write it on your blog, your readers totally get it.”

Blair’s idea was to find positive ways of creating a life. “My blog covers the intersection of motherhood and design. When I first started writing my blog, the mommy blog world was kind of a negative place. I read a lot of venting and complaining. Writers were often sarcastic and ironic and not talking much about parenting. I decided to focus on the positive elements of being a family and find the joy in everyday living.”

While Blair says she never intended her blog to become a career, she is happy it has become a well-read and sought-after site loaded with links that lead to such topics as redecorating basics, what to wear to middle school, and how to decorate a room using Napoleon Dynamite.

She blogs three times a day and calls it her creative fix in social media. Family, though, always comes first. “From 3 p.m. until bedtime I am at home, meaning I am away from my computer,” she says. “I’ve often been asked how I balance my life, and in reality, I think balancing is a myth. On a week when my blog is going well, there’s a good chance the house is a wreck. If my blog isn’t quite as good, it might be because I’m deeply involved in family life.”

A decided advantage to her career is its portability. “My husband Benjamin W. Blair (BA ’98) is home based and works for K12.com as director for specialized curriculum (like AP courses). This makes us free to live anywhere.”

That flexibility, coupled with the Blairs’ desire to explore and introduce their children to Europe, prompted a move to Normandy, France, where they have decided to spend a year. The family was featured on an episode of HGTV’s House Hunters International, and they selected a French farmhouse called La Cressonniere that dates from the 1600s.

“As a bonus, the owners are artists and the house is full of gorgeous original art,” she says. “We are having a wonderful time.”

And you can bet she writes about it on her blog.

Finally, cravings for these cool treats can be satisfied straight from your own kitchen.