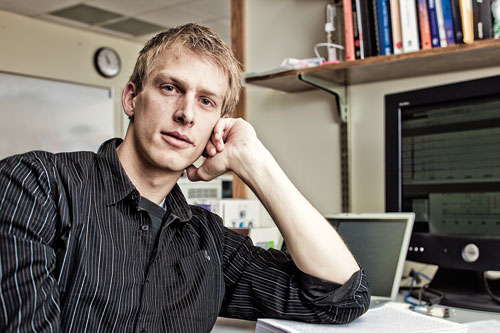 A Huntsman Cancer Institute (HCI) researcher leans over a genome analyzer as it reads millions of short sequences of DNA. The data may contain medical secrets such as a predisposition for Alzheimer’s or susceptibility to cancer. But before the DNA fragments can be studied, they must be mapped back to the correct location on the 3-billion-character human genome.

“This is where the computational nightmare begins,” says David A. Nix, director of bioinformatics at HCI. “This is the absolute first critical step in the analysis of the DNA sequence. If you misalign, all your downstream data is affected.”

Thanks to BYU undergrad Nathan L. Clement (’10) the HCI now has better assurance that their DNA is laid out in order. Working with his father, BYU computer science associate professor Mark J. Clement (BS ’85), statistics assistant professor W. Evan Johnson (MS ’03), and computer science associate professor Quinn O. Snell, Nathan developed GNUMAP (Genomic Next-generation Universal MAPper), an open-source computer program that uses a modified mathematical algorithm to more accurately sequence DNA. The result is a much clearer map of where genes are located, which may pave the way for improved diagnosis and patient care in the future.

“I was intrigued by the idea of personalized medicine,” says Clement. He solidified his major, bioinformatics—the application of programming to genetics and molecular biology—while serving a mission in Detroit. There, Clement met a man with a minor case of epilepsy who had been placed on powerful anti-seizure medication that worked but left him delirious and exhausted. Doctors planned to change the prescription, but the method to match the man with the right drug would be a long trial-and-error process. Clement’s program could help eliminate such a process.

“Using complex computer algorithms, we would be able to model his specific body type, give him the drug in the model, then see how it reacted to his specific genetic makeup,” says Clement.

While clinical procedures like this are still a long way off, programs like GNUMAP help identify significant DNA markers for further study. But whereas some DNA sequencing programs can lose 30 to 50 percent of the data, GNUMAP can sequence more than 85 percent of the genome.

“As he was designing the algorithm, he described to me all of the architectural decisions he was making,” his father says. “I caught the vision of what he was seeing. . . . It was a humbling experience because I felt like his solution was probably better than [what] I could have come up with.”

The paper, “The GNUMAP Algorithm,” on which Clement was lead author, was published in the journal Bioinformatics. Graduating in August, Clement plans to pursue a PhD.

“GNUMAP is a great application, but it’s just the start,” he says with a smile. “In research, there’s not a lot of major breakthroughs, but it’s all about building on what others have done and applying it in an effective way.”

President Worthen discovered that a good measure of our eternal progress is how much joy we derive from service.

Think you know the BYU campus? Put that knowledge to the test.