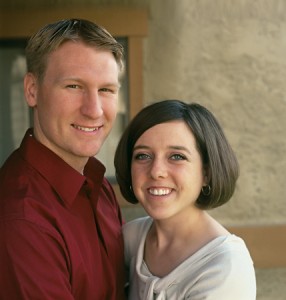 A nurse implements the do-my-best philosophy to excel at school, work, and home. Photo by Bradley Slade.

Unaware of her husband’s clandestine actions, Melissa McNutt Winder (’05), a nursing student from Bountiful, Utah, continued her everyday activities—maintaining a 4.0 GPA, serving as a tutor, and volunteering for the Nursing School’s curriculum committee.

James was busy, too, though his furtive actions went unnoticed. He was talking to professors, writing essays, and trying to keep everything quiet.

Then came the surprise. James presented a portfolio to his wife full of recommendations from professors as well as essays he had written. And the surprise went beyond a nice portfolio. James had also nominated his wife for the best college/university student for Utah’s 2005 Best of State, an award that celebrates individuals and groups who have shown excellence in a particular field.

“My favorite thing about medicine is healing—not just from the illness, but the whole person. I love sitting and talking with patients, hearing about their lives, and helping them relax.” –Melissa Winder

Winder won for her category and attended an awards gala where she received a bronze plated medal. But that wasn’t the most important thing to her. “My favorite part was all the work my husband did, to get everything together,” she says.

While Winder’s award highlights her academic achievements, those who know her say her intellect is just one of her areas of excellence. “Besides being smart, besides being kind, she’s very well-rounded,” says Carma K. Miller (MS ’00), a nursing professor who spent two weeks with Winder at Camp Rogers, a camp in the Uinta Mountains where kids from every economic situation and background are invited to attend. “Melissa’s not all nurse. She’s well read, interesting, lively, and she’s got this great personality.”

Winder has always been a capable and curious student. “When I was in daycare and preschool, I knew I loved to learn,” says Winder, who attributes her love of learning to several small experiences she’s had.

In an eighth grade history class, Winder would sometimes receive grades lower than those of her fellow students even though she had completed the assignment in much the same way. “I would say, ‘Mrs. Fullmer, I don’t think I deserve this grade. All the other students did it the same way,’” Winder recalls. “Mrs. Fullmer said, ‘I know you, and I know if you put more effort into it, you can do something even greater.’ That was one of those moments where I realized if I really put my mind to it, I could do great work.”

Winder’s efforts are reflected in her grades—she has maintained a 4.0 GPA through both her high school and college careers. “Melissa is absolutely meticulous as a student,” says Miller. But maintaining a perfect GPA isn’t an obsessive pursuit for Winder. “I thought it would be nice if I could keep a good GPA in college, but I didn’t expect a 4.0,” Winder says. “I thought, ‘I’ll do my very best, and if I get a 4.0, great, but if not, I’ll still know I did my best.’”
That do-my-best philosophy extends beyond grades for Winder, who—while finding joy in her hard school work—finds even greater joy in helping others, which was why she chose to study nursing. “My favorite thing about medicine is healing—not just from the illness, but the whole person,” says Winder. “I love sitting and talking with patients, hearing about their lives, and helping them relax. With nursing, I can spend more time with the patient and do a more holistic approach than I would be able to do as a doctor.”

Ultimately, Winder hopes her education and experiences will help her as a mother. “My number one goal is to be a mother,” she says. “Getting an education has been important for me in raising my kids and in contributing to society.”

Instructors from the Martha Graham Dance Company teach BYU students how to communicate through dance.

To look into the eyes of a child and see in them a hope for the future is a talent this BYU professor is putting to use.