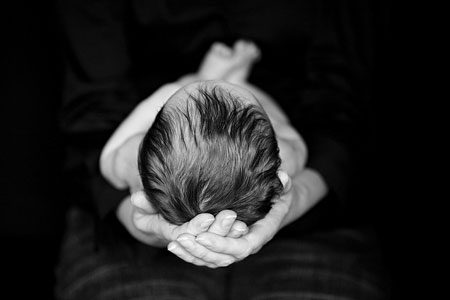 It took Kelli N. Saunders (’09) over a year to photograph 16 mothers in three states and capture the essence of A Mother’s Love for her BFA final project. “Mothering and the relationship mothers have with their children has long been a fascination of mine,” says Saunders. “I’ve always felt drawn to explore the intimacy of that bond.”

Saunders, a third-generation photographer, took pictures of first-time mothers, last-time mothers, mothers of twins, pregnant women, and two of her own sisters for her project, which was displayed in the Harris Fine Arts Center in September.

Focusing on babies 18 months old or younger, Saunders aimed to feature the closeness between mothers and their children in that formative time. “It was interesting to see, especially with the really young [babies], how the mothers just held them and loved them,” Saunders says. “The new mothers—they’d never experienced that kind of love before. You could feel it; you could see it.”

An estimated $200,000 in damages occurred on the Lytle Preserve, owned by BYU, located near the Arizona border.

War Stories: A Newcomer to Motherhood

Keith W. Newcomer, '03, has been correcting his daughter for months now, but she still calls him "Mommy."