Understanding and Improving Your Parenting Style

Learn if you are neglectful, indulgent, authoritarian,  or authoritative and how that affects your children. 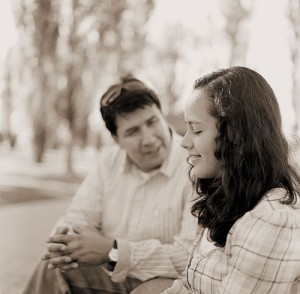 Many a Latter-day Saint parent has been devastated to find out a teenaged son or daughter has tried alcohol—even though research consistently shows parents don’t have much influence on that decision. By adolescence, peers hold more sway than Mom or Dad about such things. However, a new study by BYU sociology professors Stephen J. Bahr (BS ’68) and John P. Hoffmann finds that parents can have a significant impact on whether their teen moves beyond an experimental nip to binge drinking.

“This is a hopeful finding because it shows that parents can influence their children away from the most dangerous behavior,” says Bahr. “They can’t necessarily keep their children from trying alcohol, but they can help them avoid the level of involvement that often leads to addiction, accidents, and even death.”

The Bahr and Hoffmann study appears in the July 2010 issue of the Journal of Studies on Alcohol and Drugs. They found that parents with an authoritative style are most successful at influencing their teens away from heavy drinking, which they define as five or more alcoholic drinks in a row. Authoritative parents provide structure, limits, and monitoring while also showing warmth and support. Three other styles, authoritarian, indulgent, and neglectful, are much less successful at preventing dangerous drinking.

While social scientists have created many paradigms for studying parenting styles over the years, this four-style construct is currently one of the most frequently used in research. Many studies are showing that the authoritative style is more effective in raising emotionally healthy children than the other three. Bahr and Hoffmann believe this paradigm provides a strong, practical tool for helping parents see their parenting skills more clearly and for making adjustments where needed.

Bahr and Hoffmann suggest that parents take an honest look at themselves and settle on which of the four styles best describes them. While many parents will have characteristics that overlap all four categories—and all parents develop their own distinct style over time—most will identify with one of the four styles.

The authoritative style effectively combines supervision with affection, kindness, and warmth. Authoritative parents are confident and command respect without demanding it. They can empathize with a child who has misbehaved without caving in to pleas for lowered consequences. “Usually authoritative parents have had a warm, open-door relationship with their child all along. Their teen knows he’s loved but also knows he’s not likely to slip something by Mom or Dad,” says Hoffmann.

In contrast to authoritative parents, authoritarian parents demand respect and micro-supervise while offering little warmth, kindness, or support. They can be intimidating and coercive. “I think of a military approach with this style,” says Bahr. “These parents are strict and often quite cold.” This parenting style more than doubles the risk that a teen will drink heavily.

Indulgent parents are warm and supportive but require little or no accountability. They want to be their children’s friend and are afraid of alienating them by imposing limits or by following through on consequences for bad behavior. Some are simply lazy, finding it easier to avoid discipline than face a teenager’s misconduct head-on. Their permissiveness triples the risk that their teen will drink heavily.

The last style, neglectful, is the most damaging. Children of inattentive parents get neither support nor supervision. Left to their own devices, they are nearly four times as likely to drink heavily as children of authoritative parents. “A laissez-faire attitude is extremely harmful. Adolescents don’t know how to regulate their behavior yet, and with the absence of both monitoring and warmth, they are more likely to lose their way,” says Bahr.

No parent is perfect, and you don’t need to be without flaw to be a positive influence for your teens. Bahr and Hoffmann suggest regularly taking an inventory of whether you’re over-monitoring or under-monitoring, imposing too many consequences or too few, praising enough or too little, and generally paying enough attention to your child. See “Taking Inventory” below.

One of the most important inventory items parents can review together is whether they’re on the same page. Though Bahr and Hoffmann did not study this variable, their expertise leads them to believe that not being united in parenting can cause as much harm as the authoritarian, indulgent, and neglectful styles. “If one parent is trying to provide both warmth and accountability but the other parent is indulgent, children learn to deceive and manipulate to get the indulgent parent to undermine the authoritative one,” says Bahr.

Moving Toward the Authoritative Style

A parent who falls into one of the less healthy categories can make changes that will benefit his or her children. First, suggests Bahr, if you’re not monitoring your child, start. Cell phones can be a valuable tool, especially if texting is disabled and minutes are limited. Children who’ve been allowed to do anything they want at any time will protest loudly, but Bahr and Hoffmann say to stay firm while also communicating warmth and love. So how do you demand that a teenager get home now while also communicating emotional support?

“You do it by keeping anger out of your voice and out of your body language,” says Bahr. “If there’s sternness in your voice but not anger or threats—beyond a calm statement of consequences—you will preserve the relationship, even if you don’t get obedience. A hug when they come in the door and a heartfelt ‘welcome home’ will make sure they know you care.”

Second, says Hoffmann, if you’re afraid of your teenager, build up your courage. Teenagers can be scary, but they’ll only get scarier if parents don’t take a firm and loving hand. “Give up on being their friend for now,” he says. “Friendship is more likely to come later if you resolutely guide them through these obstacle-laden years rather than let them find their own way to adulthood.”

Third, take every opportunity to convey your support and love. Praise your teenagers, show interest in their activities, have fun with them, laugh with them, and hug them as much as they’ll let you. “They might not want to spend a lot of time with you at this point in life,” says Hoffmann, “but if you’re warm and supportive whenever they’re around, they’re much more likely to respond positively to your limits and, when needed, your discipline.”

Studies show parents with an authoritative style are more effective at supervising and supporting children. Evaluate your parenting skills by asking yourself a few questions.

• Do I know where my children are at all times?

• Have my spouse and I, together with our teenagers, set reasonable consequences for bad behavior? Do we follow through?

• Do I listen to my teenager—really listen?

• When is the last time I asked my teenager what he or she thinks of my parenting and of our relationship?

• Am I afraid that if I follow through on consequences my teenager will feel distant toward me?

• Do I praise my teenager without overdoing it?

• Do I express fondness and affection to my teenager?

The latest BYU research reveals two ways moms and dads can up their emotional skills.

With W. Steve Albrecht, ’71, associate dean of the Marriott School of Management, no statement is left unsupported.

Close stepfamilies are created with communication and adaptation.