Close stepfamilies are created with communication and adaptation.

When Joseph M. (’86) and Diana Atkeson Riddick (BS ’88) were married nearly six years ago, Diana had been raising two girls for 9 years, five years as a single mom following a divorce. Joe’s late wife had been ill during their 20-year marriage, and he didn’t think he would ever have children. So when he moved into Diana’s household with a 9-year-old and a 15-year-old, he didn’t know what to expect. 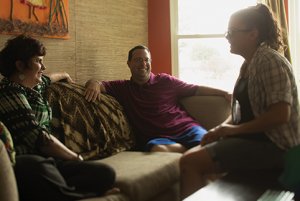 The opportunity to establish relationships in a new family has been rewarding for Joe Riddick (here with Diana Riddick, left, and stepdaughter Danielle Fairbourne).

“It’s going very well so far, but the closeness does vary between kids and between different times in their lives,” says Joe. “It takes time to build a relationship with each kid individually. It takes patience and work, like any relationship.”

According to a new study about stepfathering by BYU social work professor Kevin M. Shafer and graduate student Todd M. Jensen (BS ’11, MSW ’13), the Riddicks are doing many things right. The researchers’ article in the journal Social Work draws on the U.S. Bureau of Labor Statistics’s National Longitudinal Survey of Youth, which has been collecting information about men, women, and children since 1979. From the data, Shafer and Jensen selected a nationally representative sample of 1,088 children ages 10 to 16 years old in households with a mother and stepfather. They uncovered three keys to building harmony in stepfamily relationships.

It’s wise in any marriage, first or subsequent, to be united in parenting. In stepfamilies, unity becomes exponentially more critical, say the researchers. Potential fractures are often just below the surface, and conflict between the mom and stepdad can be shattering to a newly formed family.

Before marrying, the Riddicks talked extensively about their philosophies of parenting, and they decided Diana would relay most of the rules, boundaries, and consequences to the girls. “We discuss things in private to make sure we are both in agreement,” says Diana. “Once decisions are reached, I am the primary voice to the children. We do a lot of praying for inspiration on how best to handle certain situations.”

Sometimes they don’t agree, and Joe’s policy is to “always defer to Diana, since she is the mother.” He will step in, however, “if my wife is disrespected by the children, which thankfully has been very rare.”

According to Shafer and Jensen, the children in the study who feel close to their stepfather didn’t witness much conflict between him and their mother. Children who saw their mother and stepfather arguing frequently tended to see this new man in their home “as imposing his demands and issues and causing more tension in the home than there was before he got there,” says Shafer. “It’s logical that that child would be less inclined to approach the stepfather or want to develop a relationship with him.”

While family experts typically recommend that parents occasionally disagree in front of their children so they can model healthy ways to resolve conflict, Shafer and Jensen say this is a trickier proposition in stepfamilies. There’s already a tendency toward division along biological lines, and it’s risky to create opportunities for schism. “In a stepfamily you don’t want to show a lot of cracks in the armor,” says Shafer. “If I bring kids into the family and my new wife brings in kids, well, I can already tell you who’s going to take whose side. I don’t think you want to introduce that dynamic into your family.”

The Riddicks rarely argue, but when they do, says Diana, “we always discuss things in private. We both believe it’s not good to involve kids in parental conflicts.”

Many women have an automatic reflex to defend a new husband against complaints from children, but the researchers recommend resisting that impulse. If children feel they can’t talk honestly, they could become resentful toward the new stepparent and withdraw from the relationship. The study found that children who say they can air grievances about the stepdad with their moms are more likely to report greater closeness with the stepdad. “There’s something about a child having a safe place to complain and talk: ‘I’m struggling with this or I’m frustrated that my new stepfather does this,’” says Shafer. If the biological parent becomes defensive, the children may come to feel that they can’t talk to their own mother anymore.

Similarly, stepfathers can choose not to be resentful if they know that such venting is happening. Encouraging the special bond with their mother helps children feel secure enough to explore a new relationship with a stepdad.

The researchers also recommend that children get one-on-one time with their biological parent. It’s tempting for stepfamily parents to insist everyone join together at every activity, hoping that frequent proximity together will speed the blending. This is not necessarily the case, say Shafer and Jensen. They suggest that parents monitor their children carefully and provide one-on-one time as needed. This sends the message that existing relationships won’t be sacrificed to the new family and that sons and daughters can still occasionally have their mom’s undivided attention.

Joe Riddick recognized this principle early on. “I actively encouraged Diana to have mommy-daughter time periodically to maintain that relationship. It was not very difficult for me to do this because my parents split, and I can relate to the children. And it’s just the right thing to do.”

Adapt and Adapt Some More

In most families, the principle of putting the marital relationship first is valid. But Shafer says that in stepfamilies, parents need to adjust that approach. He believes the proclamation on the family’s statement that circumstances “may necessitate individual adaptation” applies to stepfamilies. “In the Church we’re taught that the order of relationships is Heavenly Father and Christ, then our spouse, then our kids. So some people decide, ‘Well, I took the first spouse out of the equation, and I’m just going to slide in the new one.’ But kids don’t see it that way.”

Jensen, who became part of a stepfamily when his father remarried after divorce, thinks children can feel betrayed if parents decide their new relationship comes first. “To approach it the exact same way—‘I’m going to put that new marriage first and everything else will fall into place’—oversimplifies the issue and overlooks a lot of potential complications. Kids are dealing with all sorts of emotions and psychological reactions to the breakup of their parents and then they have a new person coming in. It’s a different picture. An adaptive order of relationships might be God and Christ first, and then spouse and kids on the same plane.”

Shafer believes the adaptation idea is also helpful in thinking about stepfamilies in general. While we value the ideal, we can adapt our thinking to also
value the other-than-ideal. All families are of worth, he says. “A mom and dad and kids who are sealed together is the ideal, but that’s not always the way it’s going to play out. We need to be strengthening all families, no matter what they look like. It’s good for kids, it’s good for us as a society, and it’s good for us as a church.”

For Joe Riddick, entering a family that had already formed has been rewarding and worth the challenges. He advises other stepfathers to “think of it as a great opportunity to extend your family and establish additional meaningful relationships.”4

Sue Bergin is a hospice chaplain and author of the book Am I a Saint Yet? Healing the Pain of Perfectionism.

A delinquent child may be passing down more than just used clothes to younger siblings.