Without strong role models, many dads pull from a mix of sources to guide them in creating bonds with their children. 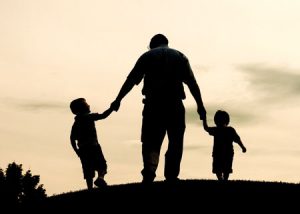 Matt is a single father struggling to raise his 5-year-old son without a spouse, without much money, and without the role model of a good father. In fact, his father was violent and distant. While many fathers in Matt’s position end up repeating those patterns, Matt is working hard to not transmit them to the next generation.

“[I try to use] as little physical punishment as possible,” says Matt. “I want [my son] to learn from his mistakes. I try to explain to him instead of just saying, ‘No, don’t do it.’ I try to tell him why, and that’s something my dad never did.”

Matt is one of 36 single fathers interviewed extensively in a qualitative study published in the journal Fathering by lead author Renata Tonks Forste (BS ’84), chair of BYU’s Department of Sociology. Along with colleagues from the University of Texas at San Antonio and the Texas Workforce Commission, Forste found that the stereotype of the single, low-income dad who doesn’t care much about his children doesn’t hold up to scrutiny. In fact, most such fathers care a great deal.

“I was struck by how many of them really do want to be good fathers but lack the skills and the role models,” says Forste. “It wasn’t that they’re deadbeat dads. They’re just clueless. . . . The desire is there but they are floundering, trying to figure this out on their own.”

Like the subjects of Forste’s research, many fathers throughout all income levels and regardless of marital status did not have good role models growing up. They grapple with how to be good fathers themselves. The fathers Forste studied who appear to be doing best embrace a rich definition of fathering, draw on more than one role model for positive fathering traits, and are intentional in their good fathering efforts.

Most men in Forste’s study had hardworking fathers who wanted to be good providers and at least occasionally attended their sons’ activities and sporting events. Fewer had fathers who talked to them in ways that created emotional bonds, and her subjects expressed wanting to build an emotional connection with their own children. Scott is raising a 2-year-old daughter on his own and told the researchers that he wants her to be able to come to him and talk about her problems. “I would like her to feel that she can talk to me no matter what,” he said.

Taking the definition of fathering beyond breadwinner and occasional activity supporter is relatively new, says Forste. The desire for men to be emotionally present, not just physically present, is growing. Research increasingly shows that more-nurturing fathers are good for children, says Forste. “These types of fathers want to provide financially for their family, and a lot of them had that role modeled in their fathers, but then they want this richer definition of fathering. They struggle to pay the bills and also have the time to spend with their kids and have a close relationship.”

Those who don’t have close connections with their own fathers are not without options. Many of the men in Forste’s study draw on the examples set by uncles, grandfathers, stepfathers, and brothers. Many of the men in Forste’s study had good role models earlier in their lives, such as coaches, Boy Scout leaders, or church leaders. But when the time came to be fathers themselves, when they really needed guidance, they no longer had those connections. Their strategy was to pull from their memories of those role models and try to apply what they remembered. Most took an eclectic approach, picking and choosing bits and pieces from different men, depending on those men’s strengths.

“Maybe the father of a friend was someone they always felt they could talk to—they would take that skill from their memory of that person. Maybe someone else was really good at disciplining or helping with homework. And someone else always went to his son’s games and played ball with him. These men piece together these different role models,” says Forste. The result is often a highly personalized, innovative mosaic of good fathering. While this approach can be effective, says Forste, there’s a lot of trial and error and it can take a lot of time. “It’s too bad some of those earlier relationships can’t carry over—that they could continue these relationships and have somebody they can talk to when they become fathers themselves.”

Forste suggests that men who have confidence in their fathering skills should make an effort to stay in contact with young men they knew as boys and let them know the door is still open. Special attention to those who don’t have fathers or aren’t close to their fathers would be helpful. “It’s especially critical for them,” she says. 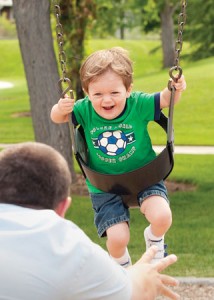 Men who grew up with negative role models—or men of any background—can become good fathers if they not only avoid the bad examples but also supplant them with positive ones. If they don’t, they go into “default mode,” Forste says, which is doing the same things their fathers did. “A lot of the men we studied knew they didn’t want to be like their fathers. . . . But they didn’t always know what to replace that with.”

Their solution was to look for role models, then make a conscious effort to model the good behaviors, replacing the old patterns with new ones. “Unless they were really thinking about it and making a conscientious effort to change, they tended to fall back into the old patterns,” says Forste.

Forste found that the more involved men were in fathering, the more they could see where they lacked skills and needed help. Less-involved fathers, especially those who parented only on weekends, were not looking for input because they thought they had things in hand. “When we asked those not really involved in their kids’ lives, ‘How are you doing?’ they would say, ‘I’m great. I’m a great father.’” The more involved fathers would reply that they were struggling, and that self-awareness made them more open to looking for and receiving help.

For many of the subjects, talking to a researcher about fathering triggered self-reflection. “It wasn’t something they had done before, where they actually sat down and thought through why they think about fathering the way they do and what their tie was to other people in their lives,” Forste says. “For some of them, they seemed motivated to go out and reconnect or build those ties even more.”

How Women Can Help

Wives of men who didn’t have good fathering role models can and often do provide their husbands with cues about how to be better fathers, says sociology professor Renata Forste (BS ’84). Ex-wives can provide this input as well if they put their differences with ex-husbands aside in the interest of their children. Women tend to be the gatekeepers to children post-divorce, and they serve their children best when they not only allow but also encourage fathers to be involved in parenting.

Forste also believes that as we broaden our definition of fathering and our expectations of men, we have to be realistic about what someone can and cannot do. While balancing roles has been a topic of discussion for women for decades now, Forste thinks the time is ripe for men to balance them as well. Those who want to embrace a richer definition of fathering realize that developing emotional bonds takes time, and they struggle with both providing financially and providing quality presence.

Sometimes, Forste says, the women in their lives add to that struggle rather than ease it. “I worry sometimes that, as women, we expect fathers to make lots of money, but yet we also expect them to be home and help out. Maybe we have to draw the line and say, ‘I can live with less money if my husband can be here more.’ You can’t expect them to be in two places at once.”