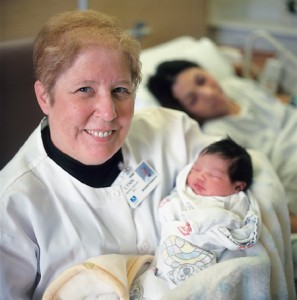 Nursing Professor Lynn Callister shows perinatal nurses how to connect with their patients – from any culture. 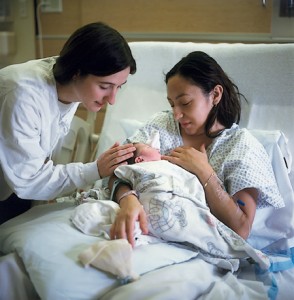 One day, Vega was assigned to a Chinese mother. Callister recalls, “As Susie entered the birthing room, she instinctively noticed the tension in the room.” A quick analysis revealed that the parents-to-be spoke very little English. The doctor couldn’t make the woman understand what he wanted her to do, and the husband was watching helplessly. Vega says, “I just got up really close to her and put my hand on her shoulder, and I went through the motions with her of taking a deep breath and pushing. I showed the husband what he could do to help, and I calmed the doctor down. It ended up being a really beautiful experience.” Callister finishes the story. “The husband was just thanking her profusely afterwards. He said, ‘I am so grateful. It is so great that you speak Chinese.’ And she said, ‘I don’t speak Chinese.'” The father, touched by Vega’s gentle approach to nursing, truly thought she had spoken his language. “This is my goal—this is what I hope for,” Callister says as she recalls Vega’s experience. “I want nurses to be able to connect with the women they care for. I want them to be able to transcend barriers in caring. Susie cared. And she showed that even though she didn’t know their language, she could still speak with the language of the heart.” —E. Liza Richards, ’02

The most recent study of BYU nursing professor Lynn Clark Callister, ’64, has uncovered a startling fact: the longer a Mexican woman lives in the United States, the more likely she is to have a low-birth-weight baby.

“It really is a paradox,” Callister says. Although newly arrived immigrants’ situation usually includes factors that increase the risk for low-birth-weight infants—including low socio-economic status, lack of education and insurance, inadequate prenatal care, and younger maternal age—they have healthier babies than their more acculturated counterparts. Callister explains that the traditional Mexican culture actually acts as protection for the immigrant women. When the women abandon their traditions and become more acculturated to the U.S. lifestyle, they tend to inherit some of the culture’s worst habits, including drinking, smoking, sexual promiscuity, and illegal drug use. Their once-healthy, nutrient-rich diet is often replaced by one high in sodium and fat. And as their poverty forces the women to leave their home in search of work, the time and effort they are able to dedicate to their role as mothers decreases.

Because the results are harmful for Mexican American mothers and infants, Callister wants to curb the trend. “The whole purpose of this particular research is to design an intervention program where Mexican immigrant mothers teach other Mexican immigrant mothers,” she explains. “They will talk about preserving these values and being proud of the traditional beliefs that are associated with positive health in mothers and their families.”

A Look at the Baby Brain