Tracing the Great Plan of Happiness

By Richard H. Cracroft and Rachel Jeppsen in the Fall 2005 Issue

Latter-day Saints’ distinctive worldview finds its way into most everything they write.

If one reads much of contemporary Latter-day Saint literature, he or she can quickly begin to shape some solid generalizations. One such safe generalization is that the Latter-day Saint view of the universe is fitly framed by and firmly fixed in the plan of salvation, as taught by the Prophet Joseph Smith, born 200 years ago on Dec. 23, 1805. This “great plan of happiness” (Alma 42:8), peculiar to the Church of Jesus Christ, permeates everything the Saints think, do, and are.

The recent death of Hugh Winder Nibley, BYU professor of ancient scripture emeritus and an LDS scholarly treasure, has focused Latter-day Saints’ attention on his enormous contributions. His works continue posthumously in volume 15 (of 22 projected volumes) of his Collected Works on Mormonism and Early Christianity, Apostles and Bishops in Early Christianity (Deseret Book/FARMS; 254 pp.; $24.95). This volume contains lectures that Nibley prepared on his typewriter for a course he taught in 1954. In this timeless and authoritative publication, edited by Professors John F. Hall (BA ’75), of humanities, classics, and comparative literature, and John W. Welch (BA, MA ’70), of law, Nibley examines the office of bishop in the early Christian Church. He considers bishops’ relationship to the Apostles and other priesthood officers of the Church and the changes that occurred to the bishop’s office during the first few centuries of the Christian era. Nibley establishes authoritatively that which Latter-day Saints have preached for 175 years, that the changes “led to an overall secularization and despiritualization of the role and behavior of bishop” (xvii) and, with other doctrinal changes and losses, would lead to the Apostasy of the primitive Church of Jesus Christ.

A more accessible volume for vintage Nibley is a new edition (2004) of Nibley on the Timely and the Timeless (BYU Religious Studies Center; 333 pp.; $27.95), with an autobiographical introduction by Nibley and two forewords, by BYU senior librarian Gary P. Gillum (MLS ’71) and philosophy professor emeritus Truman G. Madsen. This collection contains 13 essays chosen by Nibley’s peers, including “The Expanding Gospel,” “The Sacrifice of Isaac,” “The Haunted Wilderness,” “Educating the Saints,” “Zeal Without Knowledge,” and “Beyond Politics.” For those who want to savor Brother Nibley’s focused and dedicated life and unparalleled scholarly contributions, I recommend again the fine biography by Nibley’s son-in-law Boyd J. Petersen (BA ’88), Hugh Nibley: A Consecrated Life (Greg Kofford Books; 446 pp.; $32.95). 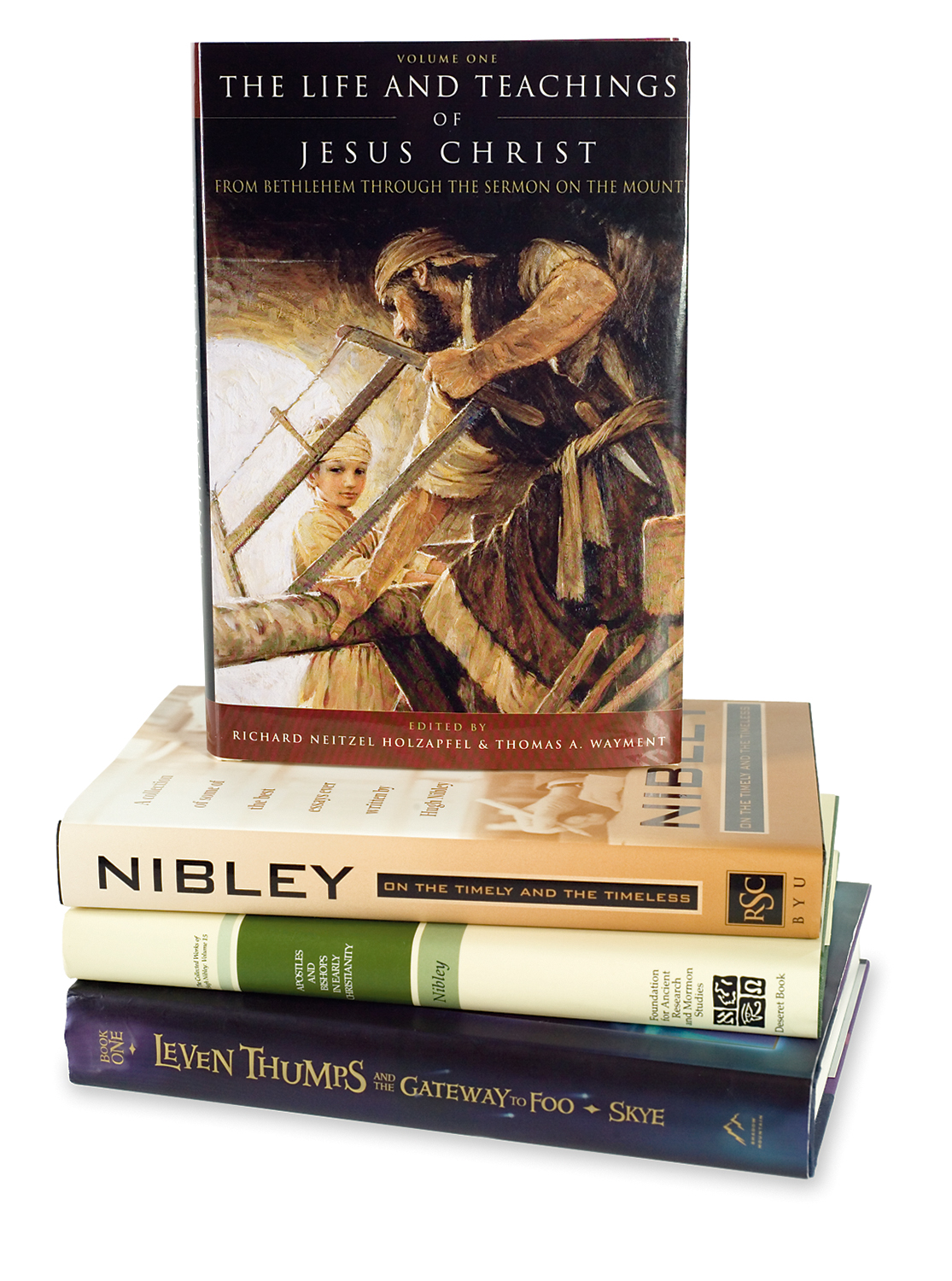 Associate professor of Church history and doctrine Richard N. Holzapfel (BS ’80) and assistant professor of ancient scripture Thomas A. Wayment have edited The Life and Teachings of Jesus Christ, Volume One: From Bethlehem Through the Sermon on the Mount (Deseret Book; 4l8 pp.; $24.95). They present 13 essays by Latter-day Saint scholars that provide updated research about and analysis of the birth and ministry of Jesus Christ. The essays comprise a kind of enriched LDS handbook to studies of the mortal life and times of the Lord. Each enlightening essay incorporates biblical scholarship and elucidates a different time period in the Lord’s ministry. For example, associate professor of Church history and doctrine Jeffrey R. Chadwick’s (MA ’84) description of the Temple of Herod is fascinating, as are professor of ancient scripture S. Kent Brown’s treatment of Joseph and Wayment’s appendix on “The Birth and Death Dates of Jesus Christ,” which postulates that the Lord was born in the spring or winter of 5 b.c. and died on April 7, 30 A.D.

As editor of Opening the Heavens: Accounts of Divine Manifestations, 1820–1844 (Deseret Book/BYU Press; 500 pp.; $32.95), BYU law professor John W. Welch collects for the first time in one place the primary documents of the key events of the Restoration. Here is rich documentation of the opening of the heavens, beginning with 10 accounts of Joseph Smith’s First Vision. In addition to accounts of many heavenly visions, angelic visitations, and other visual revelations experienced by Joseph Smith and other early members of the Church, Welch collects 200 accounts from individuals close to events surrounding the translation of the Book of Mormon. Typical of the accounts is Oliver Cowdery’s testimony to Jacob F. Gates shortly before his death: “I am a dying man, and what would it profit me to tell you a lie? I know . . . that this Book of Mormon was translated by the gift and power of God. My eyes saw, my ears heard, and my understanding was touched, and I know that whereof I testified is true. It was no dream, no vain imagination of the mind,—it was real” (p. 144).

In Kindness to Animals and Caring for the Earth: Selections from the Sermons and Writings of Latter-day Saint Church Leaders (Inkwater Press; 140 pp.; $16.95) Richard D. Stratton (BS ’94) has compiled 200 statements by Presidents of the Church of Jesus Christ, other General Authorities, notable Latter-day Saints, historians, and scholars on kindness to animals and caring for the earth. This unique volume considers the place of animals in LDS doctrine and discusses such little-known Church programs as Humane Day (1898–1918) and the Primary’s KTA (Kindness to Animals) clubs (1952–57). Stratton begins his collection with an epigraph from President Joseph F. Smith: “Nature helps us to see and understand God. . . . Love of nature is akin to the love of God; the two are inseparable.”

I select an armful of excellent novels from many recently published works of LDS fiction by BYU alumni. Chris Stewart has launched a riveting, exciting multi-volume series, The Great and Terrible. In volume 1, Prologue: The Brothers (Deseret Book; 224 pp.; $17.95), Stewart tells the story of Luke, Samuel, Ammon, and Elizabeth in their premortal estate and during the opening days of the War in Heaven. In that conflict the line is drawn between the forces of Michael and Lucifer, as missionaries from both sides undertake to persuade their siblings into one of the two opposing great cities. In volume 2, Where Angels Fall (Deseret Book; 367 pp.; $18.95), Stewart follows the fortunes of Luke and Ammon (the sons of LDS Air Force general Neil Brighton), Sam, Brighton’s adopted son, and Elizabeth, born into mortality as a member of Iran’s Pahlavi family. Each of these characters becomes an instrument in effecting the purposes of God in the cosmic drama of the continuing great and terrible war—as it plays out on Earth in 21st-century Saudi Arabia. This gripping tale is fraught with echoes of pre-earth life and laden with implications for the present war and turmoil in the Middle East.

Leven Thumps and the Gateway to Foo (Shadow Mountain; 348 pp.; $17.95) is the first in a projected series of fantasy novels by “Obert Skye,” who is really Robert F. Smith, a Deseret Book manager in Albuquerque, N.M., and author of a half-dozen LDS comic novels (including Baptists at Our Barbeque, which was recently adapted into an enjoyable film). Leven Thumps, age 14, is an orphan who learns from Clover, a foot-high sycophant from the magical world Foo, that he has the gift of seeing and manipulating the future. Leven also learns of a secret gateway that bridges the real world and Foo, which makes it possible for human beings to dream, imagine, hope, and aspire. Foo’s existence is threatened by the evil Sabine and his shadows. Leven undertakes a fantastic journey to save Foo, beset all the while by Sabine and company. Like other Christian fantasy novels, Leven Thumps suggests the perils of the mortal journey as traveled by the indomitable human spirit impelled by imagination and righteous aspirations.

Lee R. Nelson (BA ’68), whose five-volume Storm Testament and other works of fiction are well known to many BYU alumni, recently undertook the audacious task of completing Twain’s Out West fragment, first published in Life magazine in 1968. Nelson’s version, Huck Finn and Tom Sawyer Among the Indians (Council Press/Cedar Fort; 277 pp.; $18.95), succeeds amazingly well. Building on the 62-page fragment (which Twain set aside after his foremost female character is abducted by Indians), Nelson spins a page-turning yarn in which Huck follows the captive Peggy across the plains to Utah and California. En route, Huck must endure the insufferable opinions of Tom Sawyer, who in Nelson’s redaction has become a self-righteous, bigoted, and impractical prig. Nelson has infused his rewrite with Twain’s opinions about the Indians, the Mormons, and romanticism. He succeeds in expanding Twain’s abortive fragment into an Old Western page-turner. 4 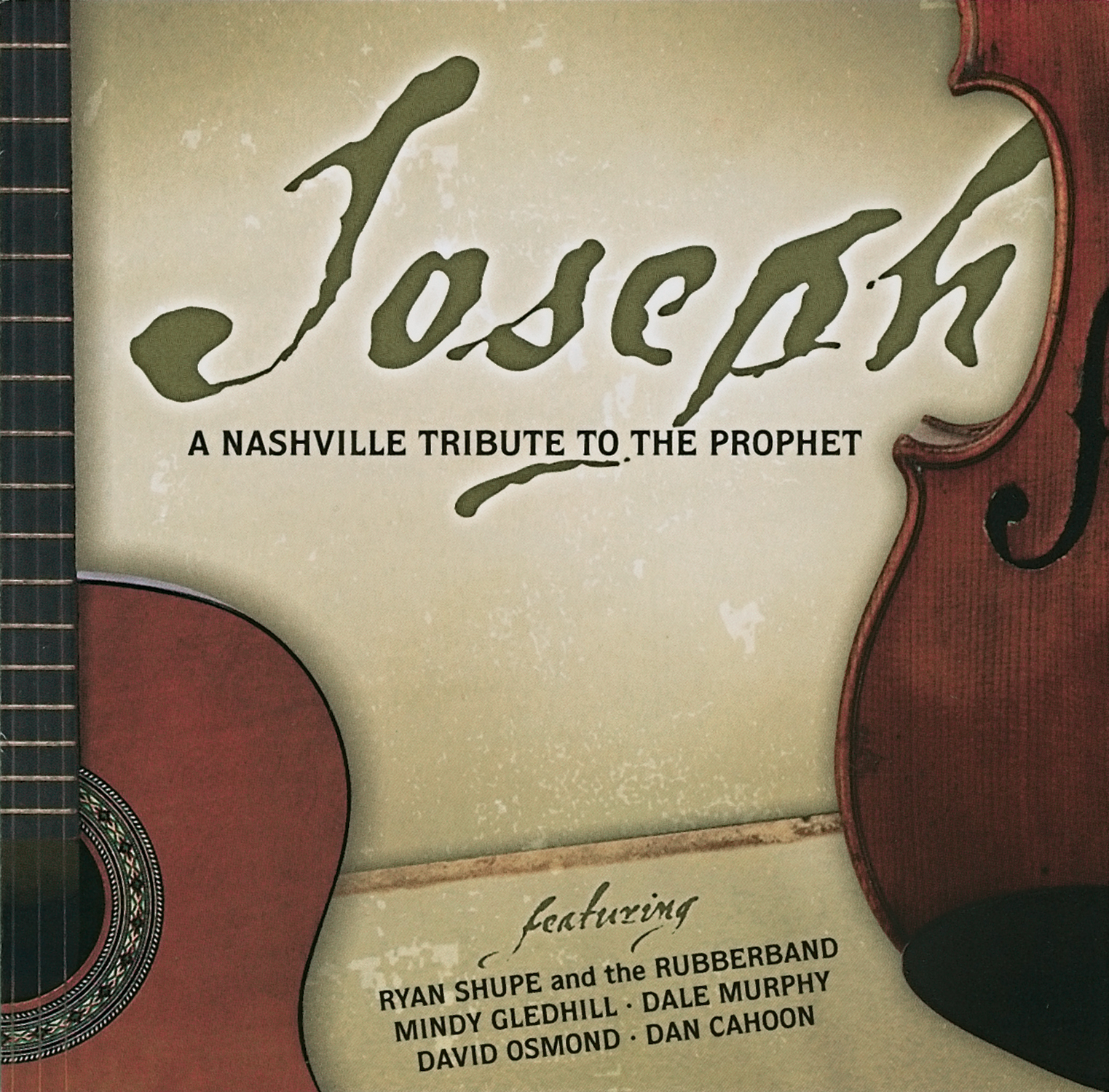 Nashville, Tenn., often linked with the likes of Elvis Presley, Dolly Parton, and B.B. King, has come out with something a little different than its typical blues and twang. In July, Jason T. Deere (’93), an award-winning songwriter and producer, and Daniel T. Truman (BA ’84), pianist for the country band Diamond Rio, teamed up to release Joseph: A Nashville Tribute to the Prophet.

The album highlights Joseph Smith and others who helped build the foundation of the Church of Jesus Christ. The songs, each introduced by a brief narration, provide intimate glimpses into the lives of Joseph Smith, Emma Smith, Hyrum Smith, Porter Rockwell, and the pioneers who left their homes for the gospel.

Included in the album are the voices of David V. Osmond (BA ’03) of the Osmonds—Second Generation, Dan Cahoon of Marshall Dyllon, Mindy W. Gledhill (’02), and Ryan Shupe and the Rubber Band—all interwoven with the narrative voice of baseball legend Dale Murphy.

The album’s seeds were planted in 1989, when Deere was serving a mission for the Church, but it wasn’t until years later—when Deere and Truman began working together—that the album was completed.

In a near-perfect season, the BYU women’s volleyball team ranked No. 1 in the nation for 11 weeks.

Professors and students at BYU are working to help kids with autism learn social skills . . . through a fish.

The Fourth Estate is in shambles. Experts from Atlantic, Fox News, CNN and more talk how—and who—can save it.