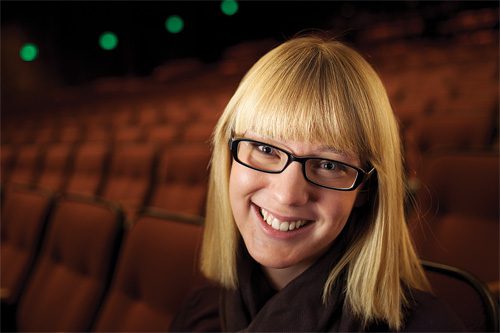 Alyssa Herzinger’s essay on Gerrit de Jong Jr., the first dean of the College of Fine Arts, and the 2011 Homecoming theme, Hold High the Torch, won the Brimhall Essay Contest.

It’s my last year of college, and I’m on my way to the W. W. Clyde Engineering Building for the very first time. While I’m passing the library, I hear snippets of conversations in Norwegian and Spanish, and then by the Herald R. Clark Building I hear a class analyzing Portuguese literature out on the lawn. I finally make my way to the Clyde, up the stairs, and into a truly foreign environment. The periodic table of the elements seems to take up the entire wall and mock me with its knowledge of the natural world—“You’re a French major. I don’t think you really belong here,” it scoffs. I take a deep breath, sit down, and pull out my colorful new BYU Bookstore packet. It’s time to start my physical science general education requirement.

I’m not so sure that I would have had the moxie to walk into this class had it not been required, but there is no doubt that Gerrit de Jong Jr. would have. De Jong, the first dean of the College of Fine Arts, was never one to wait for an assignment; he learned (and learned and learned) to satisfy his own curiosity. Those languages I heard on my way to class? He knew them. But not just those—when asked what languages he spoke, he replied that there was hardly one he couldn’t handle. As his interest spanned all disciplines, so did his knowledge. His wife Thelma Bonham de Jong described him as “the amator, the lover of that which he pursued, the devotee of that which he studied, the product of curiosity satisfied.”

Three times a week, I face that imposing periodic table. Gradually, the room starts to feel a little more familiar, and lights go on as I learn things I’ve always wondered about, like why the pitch of a siren goes down after it passes, and what E=mc-squared  actually means. Rather than being satisfied, my glimmer of curiosity is turning into a full-blown flame, and I feel I can begin to say with de Jong, “There isn’t a single subject in the whole curriculum that I don’t love, not just like but love”—even considering those persnickety chemistry chapters.

Gerrit de Jong Jr. didn’t develop his incredible capacity for knowledge by cramming for a tough final or by turning in a paper at the last possible second; no, he learned because of the ever-burning flame of his own curiosity and his awareness that anyone who does not learn from as many areas as possible will have a life, as de Jong put it, “much less rich, less full, less abundant than it could be.” My studies in French and humanities had me feeling as if I had a good grasp on the rich life, so it wasn’t until I took a step (however forced) out of my normal realm of oil paints and verb conjugations that I began to discover the worlds of knowledge yet to be explored, worlds with which de Jong was familiar.

Today as I walk by the periodic table, it whispers a hushed, “Bonjour!” We’ve come to understand each other, and now I’m off to new and different areas of learning—and of campus. (What goes on in that mysterious SWKT, anyway?) The legacy of learning (and learning and learning) de Jong left behind has brightened my college experience and will continue to light my way forever. As I walk across the stage to receive my diploma next spring, I’ll be reminded of de Jong’s appeal to graduates of BYU in May 1966:

Please, do not let people conclude that you went through college merely to keep up with the Joneses a little better than you would have been able to do had you become a dropout. Be a living example, not just a theoretical advocate of enduring human values. Hold high the torch. Act, not just talk, as one who has discovered some of the best of man’s thoughts and creations.

Curiosity fueled the torch that Gerrit de Jong Jr. lit and carried. Now it is our turn—let’s hold it high and light the way to more knowledge and understanding of every kind, so that when it is our turn to pass it on, it is burning brighter than ever before.

This year participants in the essay contest will research Alice Louise Reynolds, BYU's honored founder for 2006.

A Legacy of Learning

Through years of sacrifice, a private dream became a happy occasion and a lasting legacy.