A Legacy of Learning

By Cecil O. Samuelson in the Spring 2013 Issue

Through years of sacrifice, a private dream became a happy occasion and a lasting legacy.

I have been attending commencement exercises for many years. Some are more memorable than are others. For a number of you here today—and this includes more than the graduates—this occasion will have an influence on the rest of your lives. It will have nothing to do with what I or the others on the program will say. Let me illustrate what I mean, if I may, with a personal experience that has had great influence on my family and me.

I was about 10 years old when I attended the commencement at which my father received his PhD degree. He was not a traditional student; he had not gone directly from high school to the university and progressed through undergraduate and graduate studies without interruption.

No one in my father’s family had ever gone to college or a university before. After he graduated from high school, my dad spent a year in business college and obtained employment as a bookkeeper. Even though this was at the onset of the Great Depression, because of his tremendous frugality, hard work, and planning, and also because of the efforts of his parents, he was able to serve a full-time mission when relatively few others had that opportunity. When he returned home, he was again gainfully employed but harbored a rather closely held dream of a university education.

After his mission Dad met my mother. As my father shared his dreams with my mother, already a university graduate and a schoolteacher, she encouraged him to proceed with his education, although he was not receiving the same encouragement from his parents, siblings, or friends. Most thought he was very fortunate just to have a job when few others did. 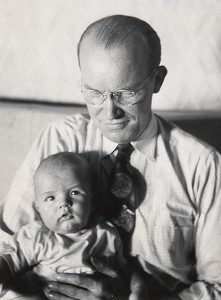 When President Cecil O. Samuelson was a child, his father earned advanced degrees, building a legacy of sacrifice and achievement that has blessed generations.

At that time married women were not allowed to teach school. With no other obvious means for financial support if Dad quit his job to go to college and Mother quit her teaching to get married, they decided to delay marriage so that both could live at home with their parents while Mother taught and Dad studied.

Dad began college as a 25-year-old freshman, and Mother taught and saved what she could. He graduated in three years, going year-round, and shortly thereafter they were married. I arrived about a year and a half later, and my four siblings took their turns joining the family. Mother stayed home, and Dad worked in education and administration while working on his master’s degree, which he received a year or two later. Rather than satisfying him, however, his university experience only increased his desire for learning and helped focus his ambition on becoming a university professor. Thus—again with Mother’s encouragement—he began a PhD program while working full-time.

When the time arrived for the dissertation, it became clear that my father would need to work on it full-time if he wished to ever complete his degree. So he resigned a good administrative position at a vocational school to finish his dissertation. With four children and another on the way, he worked nights as a laborer so that his days would be free for his academic work and his children could still wear shoes and eat.

Well, he successfully completed his work and received his PhD. I remember his smile, my mother’s grateful tears that this was all over, and my feeling of tremendous pride in his achievement, even though I had precious little understanding of what it really meant. Now, decades later, I realize that this struggle to reach an important academic goal, celebrated in a happy commencement exercise, has had broad and lasting influence. Many of his descendants have followed with similar achievements in education, law, business, medicine, and other fields, but with fewer obstacles and discouragements because of the examples they have been able to follow.

While none of you will have exactly the same experience as this, each of you has a story and is part of a grand legacy that will bless not only you and those with you today but will reach on through the generations to bless many others for years to come.

This essay is taken from a commencement address given by BYU president Cecil O. Samuelson on Aug. 9, 2012.

A New President for BYU

A favorite son of Carbon County and a longtime leader in the BYU community is the new president.