By Charlene Renberg Winters in the Fall 2000 Issue 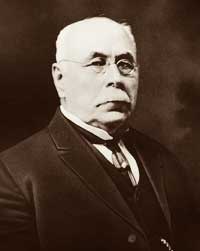 When Brigham Young University celebrated its 34th Founders Day in 1910, LDS Apostle Orson F. Whitney said, “The future of BYU is assured as long as Jesse Knight survives.”This was high praise for the mining industrialist, who had scrambled to make a living until 1896. Then, at age 50, he hit a rich vein of lead-silver in the mountains of central Utah. After making his fortune, Knight spent much of the rest of his life giving it away. Beginning in 1898, when he made a $1,000 donation for the construction of College Hall, and continuing until his death in 1921, the benefactor gave the school cash, bonds, trust funds, and more than 500 acres. BYU benefited so many times from his generosity that the 1916 BYU Banyanyearbook was dedicated to him “for what he has done and what he is.”Former university president Ernest L. Wilkinson wrote in his history of BYU that “Knight’s contributions made it possible for the institution to become a university in fact as well as in name” (Brigham Young University: The First 100 Years [Provo: BYU Press, 1975], vol. 1, pp. 357–58). Indeed, it was in Knight’s office in 1903 that he and other board members signed the articles of incorporation that made Brigham Young Academy into Brigham Young University.At the turn of the past century, Knight’s financial support helped ensure BYU‘s survival. As the school begins a new century, Knight will return to the foreground as the Founders Day honoree for Homecoming 2000. He will be remembered at the opening ceremonies, at a Founders Day luncheon, and at Homecoming Spectacular.In 1960 BYU honored Knight’s memory by naming the business building (now the humanities building) after him. Yet few students today are aware that the building’s namesake possessed what former BYU administrator Herald R. Clark called a “magnificent obsession with helpfulness” (Gary Fuller Reese,“Uncle Jesse”: The Story of Jesse Knight, Miner, Industrialist, Philanthropist[Provo: BYU master’s thesis, 1961], p. 65). In addition to his support for BYU, Knight also provided generous and much-needed financial support for the LDS Church.Because he had the attitude of an ever-helpful “rich uncle,” always willing to rescue those in financial straits, he became known to many of his contemporaries simply as “Uncle Jesse.”Knight’s early life had been punctuated by poverty. He was born in Nauvoo on Sept. 6, 1845, the sixth child of Newell and Lydia Knight. The Knights joined the western exodus in late 1846, but Newell made it only as far as Nebraska, where he died in January 1847. Lydia, pregnant with their seventh child, joined other pioneers at Winter Quarters. The family reached the Salt Lake Valley in 1850.As a child, Knight gathered pigweed and sego lily roots to augment the family food supply. By age 11 he was hauling firewood with a team of oxen. Over the next dozen years, Knight held a range of jobs: teamster, logger, scout and guide, railroad worker, member of a cavalry, rancher, cattle buyer, trader, and miner. At some point during those years he lost interest in the LDS Church, although he married Amanda McEwan, an active Latter-day Saint, in 1869.Then in 1887 an experience forever changed his commitment to the Church. A rat fell in the family well, died, and decomposed. Jennie, his youngest daughter, was the first to become ill from drinking the contaminated water. Despite his professed lack of faith, Knight was finally persuaded to bring in elders to give her a blessing, and Jennie recovered, something he always considered miraculous.His oldest daughter Minnie, however, died of the infection, and he remembered that 17 years earlier she had nearly died of diphtheria. At that time Knight had promised that he would not forget God if the Lord would spare Minnie’s life. As he described it, “I had not kept that promise. . . . I prayed for forgiveness and help. My prayer was answered and I received a testimony” (J. William Knight, The Jesse Knight Family[Salt Lake City: Deseret News Press, 1940], pp. 35–36).The family then lived in Payson, Utah, about 25 miles from the Tintic mining district. While visiting the district one day, Knight sat under a tree on Godiva Mountain and heard a voice that told him, “This country is here for the Mormons.” He always remembered the voice and interpreted it to mean that the wealth of the land was meant to assist the Latter-day Saints.Not long afterward, Knight staked his first mining claim, which he sold in 1890 for $14,000. This provided funds to move his family to Provo. 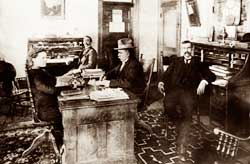 Jesse Knight (wearing hat) and others in his Provo office. BYU board meetings were sometimes held there.

According to Diane L. Mangum, whose story about Jesse Knight appeared in the October 1993 Ensign,“Always generous, Jesse became even more open-handed with his newfound prosperity. He offered help to everyone who asked, and often cosigned on loans for them. More often than not, Jesse was left to repay the debts. His money and credit slipped away, and he even had to mortgage the home he had built in Provo.”Knight had a natural instinct about land. He returned to Godiva Mountain, located some promising limestone outcrops, and decided to stake a mining claim there. He then visited his brother-in-law Jared Roundy and offered him a share in the stake. But Roundy declined, calling the claim a “damned old humbug.”Knight secured a loan and dubbed the mine “Humbug.” It turned out to be one of the richest lead-silver deposits ever found in the West.It wasn’t long before his wealth was used to aid BYU. Although not well educated himself, Knight had sent several of his children to Brigham Young Academy and had observed firsthand the school’s financial struggles.In 1901 Knight accepted an invitation to join the board of Brigham Young Academy, and he later became a member of the executive committee. For the next 20 years, he donated land, bonds, irrigation shares, and money to assist the university. The Knight family funded half of the $130,000 needed to build the Karl G. Maeser Building, and when more money was needed Knight bought back, for $20,000, the Blue Bench Irrigation bonds he had donated to the school.In later years, the Jesse Knight Endowment funded the construction of Amanda Knight Hall and Allen Hall. The Knight-Mangum Building was named for Knight’s daughter and daughter-in-law, who followed his example of generosity to BYU.It is little wonder that Elder Whitney praised Jesse Knight on Founders Day 1910 and that 90 years later Knight is still honored as a man who lived by his creed, “The earth is the Lord’s bank, and no man has a right to take money out of that bank and use it extravagantly upon himself” (Orson F. Whitney, History of Utah [Salt Lake City: George Q. Cannon and Sons, 1904], vol. 4, p. 514).

From Knights to Cougars

An unlikely high school has made a name for itself in boy’s basketball—and produced a third of the Cougar roster.

Something Different on a Weeknight

SAB sponsors events on Wednesday and Thursday nights in the WSC for students looking for a break from homework.