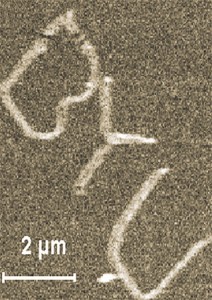 A Team of BYU researchers uses a new method to scribe lines on a silicon surface using an atomic-force microscope. The letters “BYU” shown here are 20 times smaller than the width of a human hair. This technology could lead to brighter computer monitors and cell phone screens, increasingly sensitive chemical sensors, and more detailed replicas of human tissue.

NANOTECHNOLOGY has been touted as a key to molecular-level medical and manufacturing breakthroughs. This science of the very small just got an important tool that will help researchers make good on its hype. In the Feb. 3 issue of Applied Physics Letters, a team of BYU scientists reported that it has developed a method that may help scientists and the manufacturing industry better understand nanotech processes—which could ultimately lead to brighter computer monitors and cell phone screens, increasingly sensitive chemical sensors, and more complex replicas of human tissue. The process is roughly congruent with digging ditches under water and then draining the water from everything but the ditch. Dubbed “nano-chemomechanical patterning,” the method uses the tip of an atomic-force microscope that acts like a precise shovel to scribe patterns on the surface of silicon in the presence of liquid chemicals. As the microscope cuts the silicon, it breaks strong chemical bonds, destabilizing the silicon and allowing other chemicals to attach to it in a highly stable and reliable manner. The scribed patterns act as a template onto which multiple chemicals can be successively added to fashion complex structures, like rigorous plastics and living cells. “Traditionally, we’ve taken large raw materials—a piece of aluminum, a hunk of plastic—and combined them with other resources to create complex devices and products,” says Robert C. Davis, ’89, aBYU professor of physics and lead researcher. “This technique gives scientists a better tool to build materials at the molecular level. It helps us figure out how chemical assembly works so we can one day imitate or replicate the process to build materials that are cleaner, lighter, and stronger than we have now.” Brent A. Wacaser, ’01, a former BYU physics graduate student and first author on the paper, worked with Davis on the project. “Knowing that others are interested in the work makes the effort we put into the project worth it,” says Wacaser, who has since started a doctoral program in nanoscience at Lund University in Sweden. “Working on the project has taught me many skills that I use every day in my continued research.” The study builds on the extensive work of BYU chemistry and biochemistry assistant professor and coauthor Matthew L. Linford, ’90. Also involved were physics graduate student Travis L. Niederhauser, ’00, and physics undergraduate student Michael J. Maughan, ’03. One of the benefits of the technique is a significant decrease in the size of patterns that can be etched—lines now yield widths as small as 30 nanometers, roughly 10,000 times smaller than a human hair. Previous techniques yielded lines 1,000 times larger. “In large-scale terms, that’s roughly equivalent to going from the size of a football field to that of a football,” says Davis. “The decrease in size will further help scientists work at a ‘nano’ level, giving us even more insight into how chemical assembly works. “Initial calculations also show that we should be able to improve the process to go even smaller than we are now,” says Davis. “And that’s exciting.”

Learning and Discovery in Lee’s Labyrinth of Labs

The queen of crush, a mom in a monster truck helps her family through a tough economy.