The queen of crush, a mom in a monster truck helps her family through a tough economy. 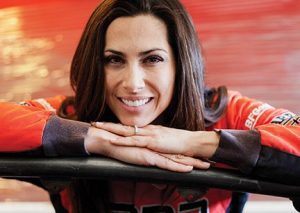 Monster truck driver Nicole Johnson is fearless. A professional rock crawler (below) before climbing into a monster truck, she frequently went vertical to conquer tough terrain.

Nicole Jardin Johnson (BS ’96) gleefully climbs into an 11-foot-high beast and prepares for battle. With her signature mane of dark hair and her commanding confidence—and armed in a helmet and fire-protective suit—she resembles a warrior princess preparing to conquer a world few women dare to venture.

The Las Vegas mother of two boys drives a custom-built monster truck, a cherry-red behemoth called Tasmanian Devil, which weighs in at 10,000 pounds and whose 66-inch tires equal her 5-foot-6 height. A closer inspection of the truck’s pointed ears, hefty ebony nose, and razor-sharp teeth reveals details in the paint, including hair and whisker dimples.

For safety she straps into a custom-fit aluminum seat with immovable neck and head restraints, but Johnson retains enough control over the 1,475-horsepower motor to hurl the monster truck up and over other vehicles.

“I have the best time,” Johnson says. “With all the color and action, it’s as if I’m in a cartoon.” To earn points she crushes smaller vehicles beneath her truck’s huge tires, drives up and over barriers at high speeds, catches serious air, and performs tricks, pushing her truck beyond its limits—all to the delight of cheering crowds.

After winning the most victories ever by a rookie, Johnson switched trucks, from the Tasmanian Devil to the Advance Auto Parts Grinder. She finished her second season by racing at the first-ever Young Guns Shootout at the Advance Auto Parts Monster Jam World Finals XIII in March 2012. She cheerfully describes the huge explosion fans saw as she spun multiple doughnuts at Sam Boyd Stadium in Las Vegas.

“I was going to just burn it down with that doughnut,” she laughs. “I was planning to either roll or blow up, and so [it’s no surprise] the tranny cooler blew into a million pieces. It took out the transmission, of course, but hey, the fans loved it, and we had a good time.”

Johnson grew up under the hood of a car, spending weekends and summers with a diesel-mechanic dad. “I was around motors, gears, and smelly oil all the time,” she says. “Like my dad, I have an analytical mind, and it was cool to explore what he did.”

As a convert to The Church of Jesus Christ of Latter-day Saints and the only Church member in her family, she attended BYU and was engaged by 19—but not to a BYU boy. She returned home to Ventura, Calif., and married Frank Johnson, her friend’s returned-missionary brother. Johnson liked Frank’s big, curly hair and his four-wheel drive ’72 Toyota Land Cruiser, which her stepdad dubbed the “Japanese Thunder Chicken” for its roaring Chevy-motor conversion. She recalls, “I was the first girl, besides Frank’s mom, who ever got to drive his Cruiser.”

Although her parents predicted she would not graduate because of her early marriage, a determined Nicole returned to BYU and finished her degree in construction management while Frank attended Utah Valley State College. 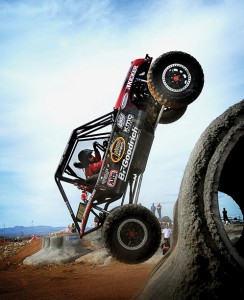 As a young family they often spent weekends camping and four-wheeling together, and their interests eventually expanded to competition rock crawling, a motor sport in which contenders maneuver four-wheel-drive vehicles over harsh terrain, such as boulders, steep inclines, and vertical drop-offs. Initially it was Frank who competed, and Nicole cheered from the sidelines when their children were young. In 2004 Nicole took the wheel when asked to drive a friend’s vehicle at a women’s rock crawling competition. Her first-place win fueled the family’s passion for off-road competition. They acquired a top-of-the-line, custom-built rock crawler and jumped into the sport—Nicole as driver, Frank as her spotter, providing another pair of eyes to help her navigate tricky spots.

“From the beginning, we decided our approach was going to be wholesome and family oriented,” Johnson says. “We were always going to be on time, and our clothes and vehicles would be clean whenever we showed up to crawl. I wanted to set a good example as a member of the Church. Plus I was going to earn respect by working hard and being just one of the guys.”

Johnson turned professional in 2007, and the family received national TV coverage in 2008 on the History Channel’s Modern Marvels during a segment that featured people who seek out dangerous roads. But a 2010 trip to an international exhibition that focuses on the auto world, including motorsports, altered her career trajectory.

“I was there late one afternoon and saw Dennis Anderson standing alone with his son Ryan. I was instantly starstruck,” Johnson says. “He and his truck, Grave Digger, are legendary on the Monster Jam circuit. Dennis was polite and encouraged me to audition for the Advance Auto Parts Monster Jam.”

As a rock crawler Johnson had rolled her truck in every conceivable direction—back flipping, bursting into flames, and barrel rolling before eventually landing back on the tires. She figured monster truck driving was just another challenge.

Within two weeks of meeting the Andersons, she test drove monster trucks in North Carolina and was offered a job by Feld Entertainment, which operates Advance Auto Parts Monster Jam. The monster truck season began six weeks later and crossed the country, with events every weekend during the first three months of the year. Her January 2011 debut was only her third day driving a monster truck. In her rookie year, Johnson achieved nine racing wins—the most victories by a rookie or a female in a single season. She also was named the Rising Star Driver at the 2011 Monster Jam awards ceremony. In 2012 she advanced from racing in arenas to televised stadium events, where the courses and competition are more challenging and the spectators sometimes exceed 100,000. Her biggest accomplishment, in March 2012, was winning a double down, meaning she won both the overall racing and freestyle competitions in one event. “What a great way to help support a family,” she says.

The Johnsons are licensed contractors who build custom homes, and she works from a home office so she can be a hands-on mom. “[My BYU] degree shaped our careers,” she says. “Frank has always been in construction, and with my degree in construction management, we have made a good team for the past dozen years.” But when the recession hit Las Vegas particularly hard, she was grateful for opportunities beyond the construction world. 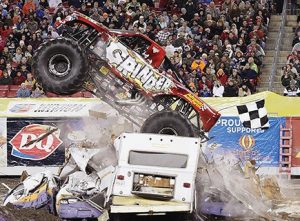 Johnson crashed onto the Monster Jam circuit in 2011 with nine wins, the most ever by a rookie or a female in a single season.

“Times get tough, and Mama’s ‘forced’ to be a truck driver,” she jokes. “This is perfect for me. I’m hyper by nature, and I have a lot of energy. I am obsessed, however, with safety. To give me focus to do well, I find a private place to pray before every race—not to win, but to do my best and be alert. I wouldn’t race without a prayer.”

Her mom, Georgia Crandall, is grateful her daughter is safety conscious. “If anything, monster trucking seems less dangerous [than rock crawling] because of all the safety regulations,” Crandall says. “I don’t know why Nicole didn’t choose something like tap dancing or knitting, because she’s very feminine. But she was born fearless. I’m learning to relax a little and really look up to her as a wonderful role model for her sport.”

As much as Johnson loves monster trucks, she also appreciates the profile it gives her to follow another interest. She sets a positive example through school groups where she urges children to respect themselves, follow their dreams with hard work and discipline, and have confidence that they can achieve goals. “I want them to envision success, to reinvent themselves, if necessary, and to realize they can be whatever they want to be. When they see this monster truck mother, I get their attention. As a bonus, my sons tell me their friends think I’m the coolest mom around.”

The Amazing Race for the BYU Case

A social media countdown to game day has fans hunting for swag-stuffed boxes across the nation.

David Grant has made a career of customizing and restoring automobiles.