An emotional loss in the London Olympics still meant a silver medal for the U.S. women’s volleyball team. Coached by Hugh D. McCutcheon (BS ’93, MS ’98, MBA ’99), the team went undefeated all the way to the gold-medal match before falling to Brazil, the defending Olympic champions. “It’s tough to lose that match. You get close, you get a taste, and everyone wants to win it,” McCutcheon says. “I’m very proud of what we achieved.”

McCutcheon, a former BYU volleyball player, has built an impressive coaching résumé, leading the U.S. men’s team to gold in Beijing in 2008 and helping the BYU men’s team, as assistant coach, claim national championships in 1999 and 2001. After the 2012 Olympics, McCutcheon left USA Volleyball and is now the head coach of the women’s volleyball team at the University of Minnesota. 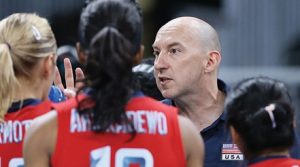 McCutcheon says coaching an Olympic team is a lot of work, but he especially enjoys the anticipation before the Games begin. “There’s a lot of optimism, and everyone’s hopes and dreams are still intact,” he says. “[The Olympics are] a great place to be, and it’s nice to feel that you’re a part of the fabric of that community. You’re proud of that Olympic family.”