The Fruit of BYU 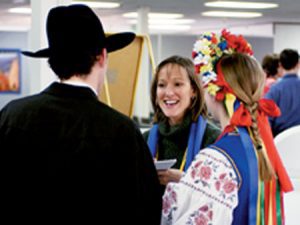 Two BYU folk dancers speak with a journalist during the 2002 Olympic Winter Games, Students, Faculty, and alumni all helped present BYU to the world.

Bringing the World to Our Campus

From hats, T-shirts, and banners to Pillow Pets, duct tape, and fingernail shields - the BYU brand is everywhere.