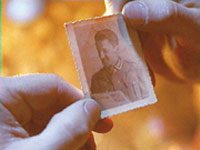 In The Last Good War a German soldier, played by Lincoln Hoppe, shares a photograph of his brother with the American he has rescued. The photograph used in the film was actually of Hoppe’s grandfather, a German soldier who died on the Russian front in World War II. Hoppe had roles in five Final Cut films this year.

The evening of the Best of Final Cut was a busy night for Lincoln Hoppe–not only did he break off an engagement, rescue a stranded old lady, have another girlfriend stolen, find a wallet, and fall in love (with yet another girl), he also fought in a war. It’s a lot for one person to do in a few short hours, but for an actor, such feats are possible.

Hoppe, a 1996 BYU graduate in advertising from Moorestown, N.J., received all five roles he auditioned for in this year’s film festival, allowing him to play major parts in no less than one-third of the films screened in the Best of Final Cut. These he adds to a growing portfolio of work, which includes roles in several TV and radio advertisements, episodes of Touched by an Angel and Promised Land, and a short film, The Face on the Barroom Floor, starring Mickey Rooney.

Six years ago on a whim, Hoppe tried out for The Garrens, a BYU-based comedy troupe. “I wasn’t very good,” Hoppe says, “but I got in because nobody else auditioned.” Experience with The Garrens led him to acting classes and a career choice. His roles in this year’s Final Cut, he says, gave him valuable experience in a variety of genres.

Although Hoppe was right at home in his comic roles (The Salesman, Unengaging Conversations, and The Adventures of Roger’s Genuine Corinthian Leather Wallet), he says the two dramas had the greatest impact on him. He enjoyed In Time of Need, an O. Henry-esque parable of selfless kindness, for its message as well as for the opportunity to work closely with his wife, Page, a 1997 BYU graduate, in her first role. For her performance Page was named Best Supporting Actress in Final Cut. Perhaps not surprisingly, the ubiquitous Hoppe was named Best Actor.
In the Last Good War a German soldier, played by Lincoln Hoppe, shares a photograph of his brother with the American he has rescued. The photograph used in the film was actually of Hoppe’s grandfather, a German soldier who died on the Russian front in World War II. Hoppe had roles in five Final Cut films this year. The Last Good War also helped Hoppe appreciate his family. In the film he played a German soldier who manages to be compassionate even in the depths of World War II. “When I first heard about the project, it lit me on fire,” says Hoppe, whose grandfather, a German LDS returned missionary, died on the Russian front in World War II. “I wanted to be in it so bad, and I wanted to be that German soldier.” At one point in the film, Hoppe’s character gazes at a picture of his brother who died in the war. The photograph used is of Hoppe’s grandfather.

On the brink of a promising career, Hoppe says he savors every opportunity to develop his performing skills. “Acting comes really hard for me,” he says. “But it’s absolutely worth it. I don’t think I could do anything else.”

Todd and Lanny Britsch grew up as children of a professor and then followed him into the ranks of BYU faculty.

Rogers willingly serves on the front liens of conflicts that endanger both body and heart.