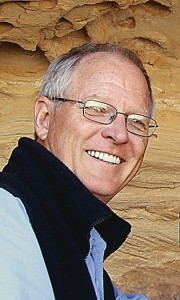 It is unusual to enter a dentist’s office and see terrariums of brightly colored poison dart frogs as part of the office décor, but for Jon G. Fuller (BS ’75) the frogs remind him of his love for the outdoors and his other life as a freelance wildlife photographer.As an Air Force dental officer, Fuller served 13 years in Panama, where he traded photography services for free rein of the Smithsonian’s Tropical Research Institute located on Barro Colorado Island in the middle of the Panama Canal.“Having majored in zoology, I was really fascinated with little critters,” Fuller says, “and I had become serious about photography during dental school.”In two years’ time he captured on film all but one lizard species in the Canal Zone, in addition to many snakes and amphibians, and he compiled the photos into a comprehensive field guide for researchers. In 1982 Fuller set out to photograph one of the most unpredictable events in the rainforest: the incidence of a 3-foot basilisk lizard running on water. 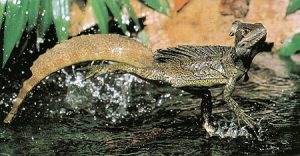 In 1983, National Geographic published Fuller’s picture of a basilisk lizard running on water; it was his first published photo.

“I was waist deep in a river of Panama the first time I ever saw a basilisk suddenly jump from a tree right in front of me and run across the 20-foot-wide river to the other side,” Fuller recounts.After many attempts Fuller finally captured the lizard running on water and submitted his photo to National Geographic Magazine. It was his first published photo, a two-page spread in the January 1983 issue. Since then he has photographed in 40 different countries, and he is represented by stock photo agencies in London, Tokyo, and the United States.Fuller left the Air Force in 1992 and moved to Moab, Utah, where he began a private dental practice. He recently served as president of the Utah Dental Association, but retired this year from active practice due to back problems. He remains active in photography, running Moab Photo Tours, a company he started to share his photographic expertise in the lesser-known sites of Moab.

Reflecting the Founders’ spirit of citizenship, BYU faculty respond to the call to serve.

Professors are testing how native plants will resist cheatgrass, a fire-causing weed.

Provo in an Hour

A BYU illustration major paints 50 portraits in an hour, capturing the people of Provo.